Six Nations Elected Chief Mark Hill sent five letters to various Ontario officials calling for a full investigation into the deaths of all missing children at residential school sites across Ontario, including the former Mohawk Institute in Brantford. 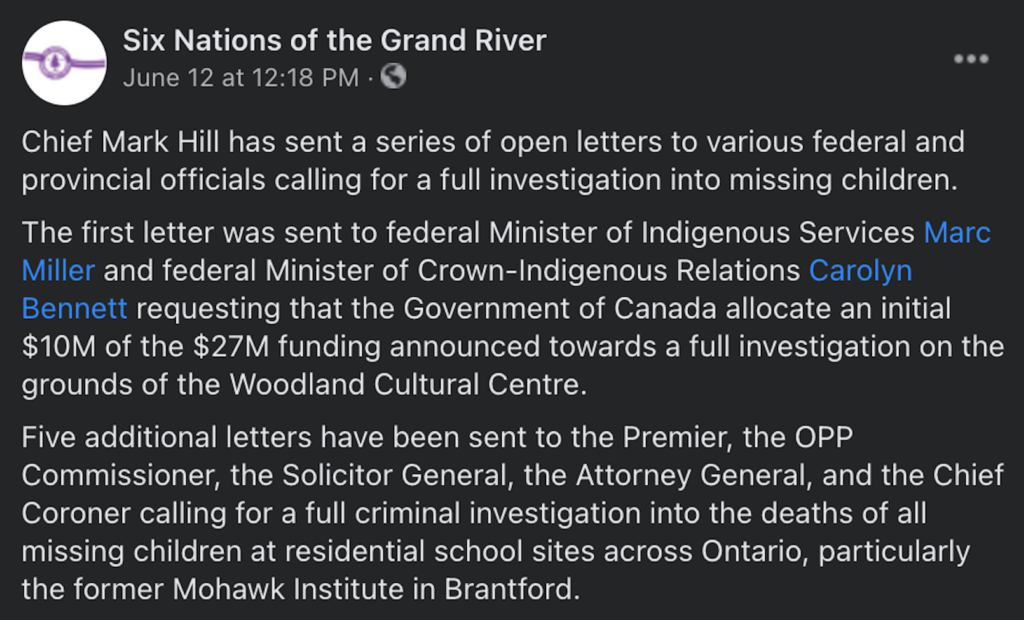 The chief also sent a letter to federal Minister of Indigenous Services Marc Miller and federal Minister of Crown-Indigenous Relations Carolyn Bennett requesting that the Government of Canada allocate an initial $10 million of the $27 million funding announced towards a full investigation on the grounds of the Woodland Cultural Centre in Brantford.

Each of the five letters addressed to the officials in Ontario read the same and share the underlying message that the elected council is requesting the province to take a deeper look into the schools across Ontario.

After the shocking discovery of the bodies of 215 Indigenous children in unmarked, unidentified graves on the site of the old Kamloops Residential School, it is critical that immediate action be taken to launch a full investigation into any and all such burial sites across Canada.

Here in Ontario, the Mohawk Institute was the oldest and longest-running residential school, having operated for 142 years from 1828-1970. The children who were sent there, generation after generation endured much abuse. Many did not return, and there are still questions about the location of their remains. We need to find their bodies and to determine what happened to them.

We are calling on your office to launch a full investigation into the deaths of all missing children. Our communist knows there are children still missing, and we will not rest until they have been found. I look forward to speaking or meeting with you as soon as possible to co-ordinate the process of this criminal investigation.

Here is a section of the letter sent to Miller and Bennett:

Because of the significant of the institution not just to the largest First Nation in Canada but to many others as well, we request that a substantial portion of the $27 million you have announced for additional searches across the country be dedicated to conducting a full investigation on the grounds of the Woodland Cultural Centre and on all related grounds and sites.

The Mohawk Institute burned down twice, changed location, and was associated with substantial farm lands on which the children were made to endure hard labour. In recent decades, nearby developments have also encroached upon the related properties, which raises additional concerns about the feasibility of locating certain possible burial sites of our children who went missing so long ago. Our community preserves the knowledge that there are missing children, and we will not rest until they have been found.

So not only is the Mohawk Institute of great significance, but the practical challenges facing the investigation are complex. The costs will be high to do this right – and you and I are obligated to do what needs to be done to find the lost little ones.

For all these reasons, Six Nations of the Grand River requests that the Government of Canada allocate an initial $10 million of the funding announced so that an appropriately comprehensive investigation can be done. We are calling for the relevant provincial authorities to do their part, but the federal government’s support is necessary to begin. The children of Six Nations must be found, justice must be sought, and resolution must be pursued.

We look forward to speaking with you as soon a possible about next steps in the solemn task.

The letters were sent out on June 11. One June 12 the Six Nations of the Grand River’s Facebook page tagged Miller and Bennett in a post to draw even more attention to its request.