SIX NATIONS — This weekend marked the centennial commemoration of HRH Edward, Prince of Wales visit to Brantford and Her Majesty’s Royal Chapel of the Mohawks.

It was the year 1919 when the hereditary chiefs of the Haudenosaunee Confederacy condoled the soon to be King of England in a traditional ceremony held before a crowd of thousands in the heart of Brantford at Victoria Park.

The hereditary chiefs of Six Nations introduced Prince Edward to war veterans surviving family members and then led the royal through a traditional ceremony naming him Dayonhemseia, “Dawn of the Day” — and a condoled chief of the Mohawk Turtle clan. Secretary of the Six Nations Confederacy Council, Chief Asa R. Hill then gave an official address, pledging allegiance to the British Crown saying, “We will defend the King and Empire with our lives.” 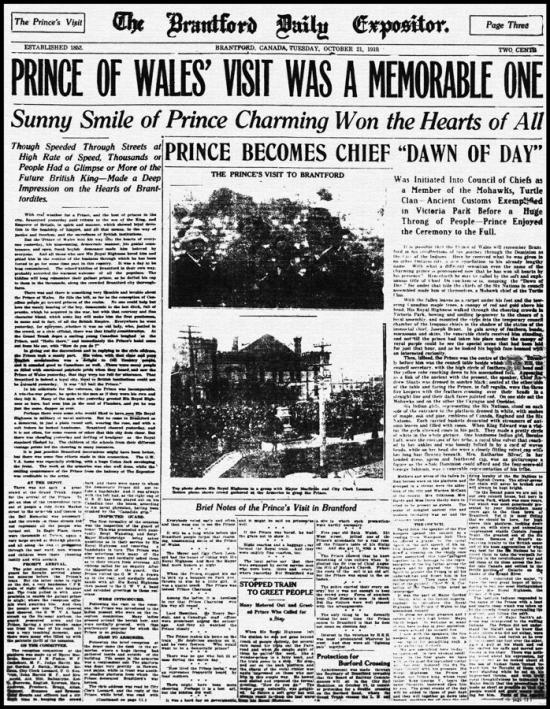 Prince Edward, who famously abdicated the throne in 1936, was not the only member of the Victorian-era Houses of Windor and Saxe-Coburg and Gotha to be made a Mohawk chief within the Haudenosaunee Confederacy.

According to history, during that 1919 visit the Six Nations people also gave a traditional title the wife of then-reigning HRH King George V. The Queen Consort, Mary of Teck was adopted and given a traditional Haudenosaunee name by the people of Six Nations— Tanonrohnkiva, or “great great woman, mother of love.”

In her essay, “A Royal Mohawk Chief” by E. Pauline Johnson, history recalls the very first condolence ceremony of a British royal to be made a Mohawk chief— Edward’s uncle, HRH Prince Arthur, Duke of Connaught and Strathearn, in 1869.

His title, “Kavakoudge,” which means “the sun flying from East to West under the guidance of the Great Spirit”.

Following The Prince of Wales condolence ceremony in 1919 — Six Nations eldest resident, Catharine Silver, presented His Royal Highness with a handmade pin of silver coins, as was tradition to exchange silver gifts as a mark of the alliance between the British and Haudenosaunee.

During her presentation Silver said, “my great, great grandfather saved King George III from Washington. That is why we are British.”

Built in 1785, the Mohawk Chapel is one of the oldest buildings in all of Canada. It was given as a gift to Joseph Brant’s following of “Mohawks and such others”, who were wilful followers of the Christian faith, for their part in the American Revolution. It is one of just six royal designated chapels outside of the United Kingdom.