The fourth wave of COVID-19 currently sweeping Six Nations is the result of travel and family gatherings among community members, according to Ohsweken Public Health.

As Six Nations deals with the highest infection rate in the province, the community is also mourning the 12th death related to COVID-19.

This is the first COVID death since April.

SNGR issued a statement on Monday, expressing condolences to the woman’s loved ones for their loss. 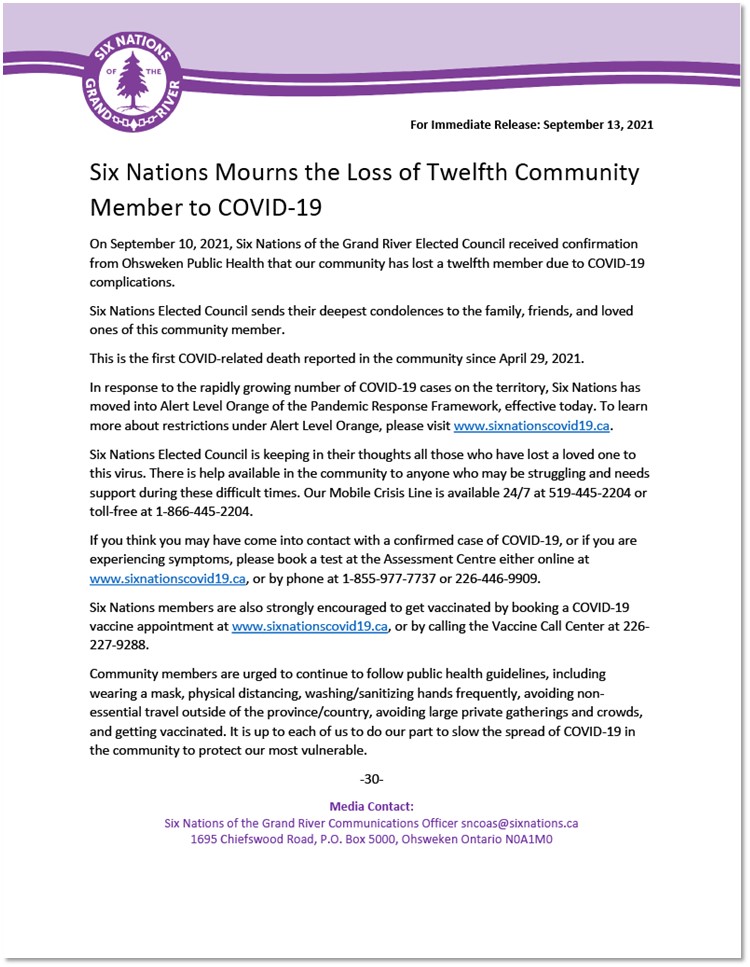 Meanwhile, the outbreak on Six Nations continues to rise. At the last reporting on Monday there were 46 active cases, 10 of which are the Delta variant. There were 181 people in self isolation and 4 people in hospital.

In the last seven days, 6 of the infections were in people who are fully vaccinated.

The increase in cases comes as the Delta variant winds its way through the community, with 24% of cases screening positive for the variant currently circulating the globe.

Ohsweken Public Health estimates that the Delta variant arrived in the community around Aug. 26, when it received confirmation from a lab that a community member’s test results screened positive for the variant.

OPH says the variant is of concern because it is more infectious and more aggressive than previous COVID-19 variants (Alpha and Beta). All Six Nations COVID swabs are screened for variants, said OPH.

OPH also confirmed that those who are unvaccinated are experiencing more severe symptoms of COVID than those who are.

Currently, around 50 per cent of on-reserve Six Nations residents have received at least one dose of a COVID-19 vaccine – far below the provincial average of close to 80 per cent.

Because of the sudden jump in cases, Six Nations of the Grand River Elected Council moved the community into a heightened COVID alert state last week, according to its colour-coded alert system.

Six Nations schools, which just re-opened this month after a year and a half of remote learning, remain open under this alert level.

It’s not known if schools or businesses will be asked to close again as the fourth wave peaks in the community. There are currently 41 active cases as of press time, with 32 of those cases testing positive in the last week alone.

Six Nations Health Services and OPH are urging community members to get vaccinated, saying the increase in cases places a higher burden on an already “overwhelmed” health care system.

“SNHS and OPH continue to encourage community members to wear masks, avoid large gatherings, wash hands regularly, and get vaccinated to protect themselves and others who can’t be vaccinated due to age or health status.”

Local News November 23, 2022 • 0 Comment
Six Nations Food Bank usage has exploded during the past three years, with numbers increasing from about 50 people a week to about 300 visitors…

Local News November 23, 2022 • 0 Comment
Six Nations is getting $500,000 in funding to help the sector with its pandemic recover efforts. The announcement was made at The Gathering Place on…

Students in the P-TECH program begin their college studies

Six Nations operating in deficit halfway through the year

Local News November 23, 2022 • 0 Comment
Six Nations of the Grand River is operating at a roughly $1 million deficit by the second quarter of the fiscal year, the finance committee…

Santa is back on tour this year

Local News November 23, 2022 • 0 Comment
After missing the jolly old man for the past two years due to Covid, Six Nations celebrated the return of Santa this year, after he…

Local News November 23, 2022 • 0 Comment
Six Nations Housing is go9ing to build a five-unit townhome complex thanks to a recent $1.5 million funding windfall. The money came from both the…

Docuseries looks at the war story of Tom Longboat

Local News November 23, 2022 • 0 Comment
A 17-year-old has been charged with attempted murder after police found a cab driver who had been shot last Friday night. On Nov. 18, Six…

Local News November 23, 2022 • 0 Comment
OHSWEKEN — The nation-wide shortage of children’s acetaminophen and cough and cold products has also hit the people of Six Nations and Mississaugas of the…