SIX NATIONS — Six Nations of the Grand River says it has accepted an accommodation deal with a developer building two new housing projects in Caledonia.

Ballantry Homes has given 42.85 acres of farm land and $352,000 to the Six Nations Elected Council as part of the accommodation deal to approve two housing projects: Beatties Estates and McKenzie Meadows on the east and west sides of McKenzie Road in Caledonia. 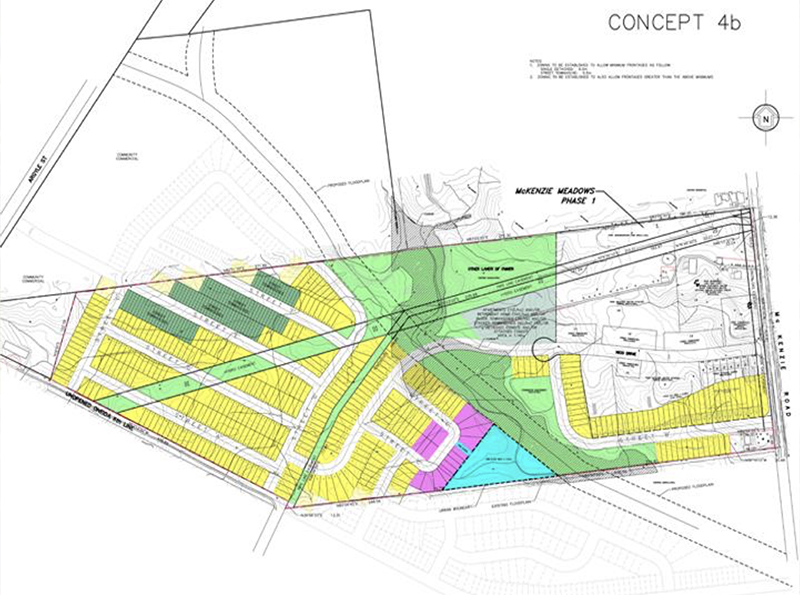 The first part of the project in McKenzie Meadows is located directly across the street from the former Douglas Creek Estates site where the land reclamation in 2006 took place. Phase 1 of the development will be at the McKenzie Road side of the farm lot. A total of nearly 1400 homes are proposed between the two projects.

Craig Rohe with Upper Canada Consultants was at a Community information session at the Six Nations Tourism building on Tuesday, April 23 to explain the project. Rohe said the original draft for the housing development was brought in 2003 but back burnered until 2016. It was reevaluated in 2018 and paired with a second development on the east side of McKenzie Drive, Beatties Estates.

Rohe said extensive archaeological studies were done on both properties. Plans for a possible extension of Sixth Line across Argyle Street across the property though to McKenzie Road are also being proposed for the future.

According to Lonny Bomberry, Lands and Resources Director at Six Nations, the community previously considered an accommodation deal in 2015 that would have given nearly $1.25 million dollars in funding for the Kaweni:io/Gaweniyo Immersion School to go through. At that time, Bomberry said, the offer was turned down. Six Nations Elected Council approved a Committee of the Whole project rejection to the offer in December 2013.

“They viewed it as selling our land rights,” said Bomberry. “What they wanted was land back. So that’s the process we’ve been embarking on and working out with developers.”

According to Bomberry a formula for compensation was made with the McClung Road development seeing Six Nations receive payment in the form of property that is half the value of the developable land in the proposed project. From that arrangement, Bomberry says Six Nations received 200 acres on the outskirts of Hagersville — 75 of which has been transferred to Six Nations and another 100 acres that is in the adding to reserve process.

Lands that are owned by Six Nations that are outside of the community must go through a bureaucratic process of being added to the reserve to give them tax exemption. In the interim, the community is responsible for paying land tax.

To date, Bomberry says Six Nations has 580 acres that was purchased in the 1990s that is being added to the reserve now, another 380 acres at Burtch that will be added, the 200 acres at Hagersville and now the 42 acre property at Little Buffalo.

Bomberry says the new accommodation package with Ballantry Homes does not affect Six Nations land claims on the Haldimand Tract or Plank Road.

Bomberry explained, “All of these lands under the Haldimand Tract are under land claim no matter where it is. Douglas Creek is no different than MacKenzie Road. Oneida Township was never surrendered but it went out of our possession in 1845. It’s been in third party hands since then. All these lands were patented in the 1850s and 1860s. It became under provincial jurisdiction. The problem with trying to claim that land back is you’ll never win in court. Because the courts are saying ‘Sorry Charlie it’s been too long, you didn’t act on it sooner.’ You have the statute of limitations, the doctrine of latches, the doctrine of acquiescence would defeat your claim if you went after this land against third parties. So that’s why our lawsuit is against Canada and Ontario saying, look, even though we don’t have the lands no more it was unlawful the way you took it. You breeched your fiduciary duty. And the money that you did get you breeched your duty on managing that because you went and willfully wasted all our money and now the court case is saying, ok – Crown-Canada, Crown-Ontario… account for that and if you can’t account for it make good on it. Make good on the land and if you can’t make good on the land you have to pay us the monetary value of it.”