BRANT/HALDIMAND — Demonstrations were held across Haudenosaunee territory Friday in solidarity with the Wet’suwet’en people who were forcibly removed from defending their traditional territory by RCMP in a violent attack. RCMP say they executed an injunction on behalf of the Coastal GasLink pipeline and arrested 14 people who are trying to stop a pipeline project that is trying to cross the nation’s land without their consent.

Outrage swept across Canada and the United States when news broke that the land defense camps, which have been situated in the pipelines path, were raided and press blocked from accessing the site by police. 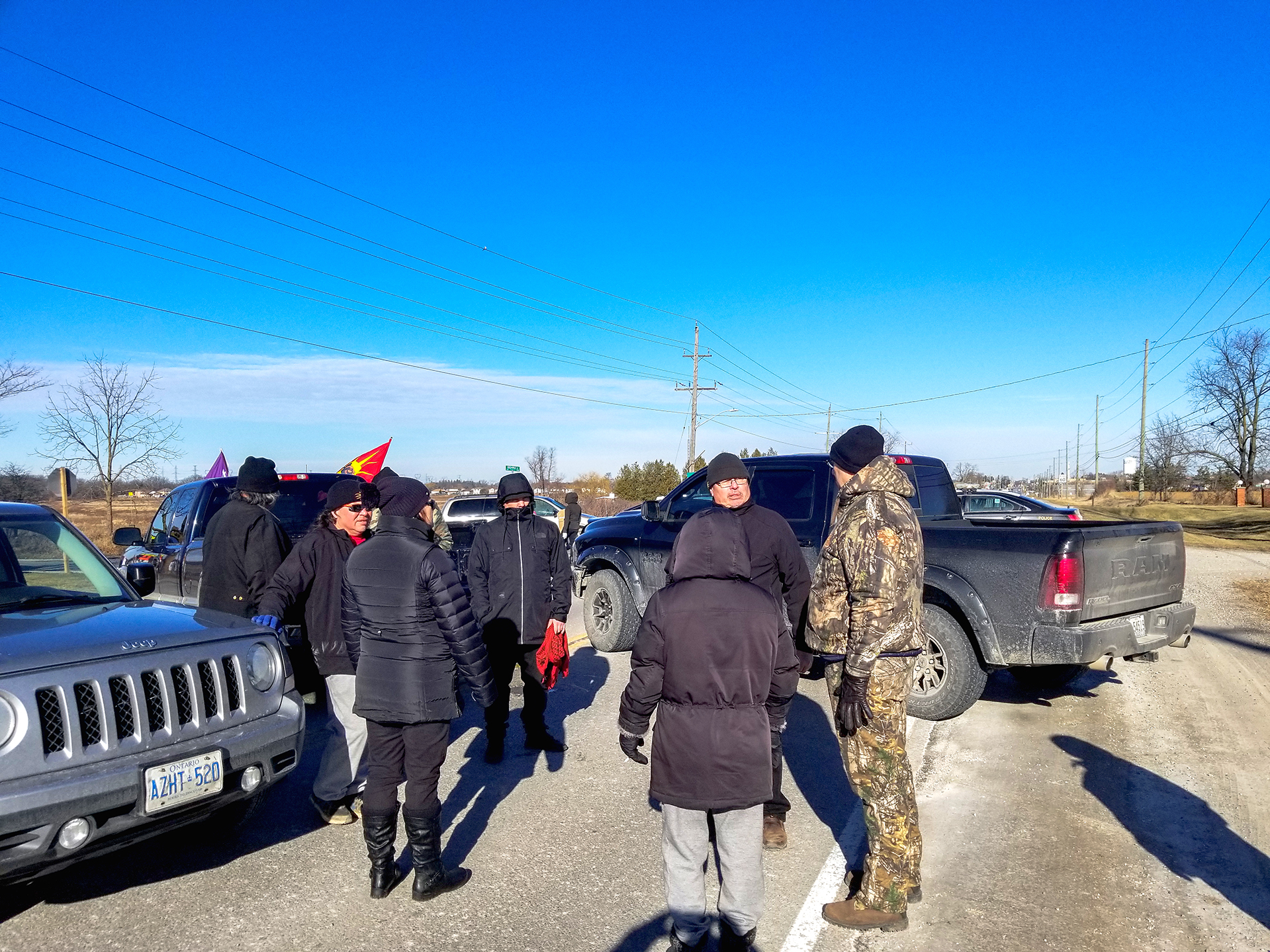 Reaction from Haudenosaunee territory was swift with men and women from Oneida Nation of the Thames, Six Nations, Tyendinaga and Akwesasne organizing to launch province-wide demonstrations — as well as urban demonstrations in Hamilton, Toronto and Ottawa.

Organizers at Six Nations set up roadblocks at Brant County Road 18 and Cockshutt Road in Brant County and in Caledonia at Highway 6/Argyle Street and Sixth Line for the day. Demonstrations in Toronto saw shutdowns to the northbound Don Valley Parkway during rush-hour.

Bill Monture, one of the men participating in Friday’s demonstrations, said “We’re in support of what they are doing out west, on the territory of the traditional chiefs out west. I’m a little confused on how the government can go on unneeded land and force people off their land. To me it’s bullsh*t,” said Monture.

Monture said it is the job of the police to preserve the peace and not to uphold the preferences of corporate interests. “If the the government was meaningful when they talk about a ‘duty to consult’ and ‘reconciliation’ — which is just lip service — they need to be dealing nation to nation and they’ve got to be truthful about it.”

Outrage grew across North America after the removal of the traditional chiefs from their territory. Commentators on social media noted that the RCMP action was in direct violation of Article 10 of the United Nations Declaration on the Rights of Indigenous People — which explicitly states that indigenous people have a right not the be forcibly removed from their own land.

Stretches of highway in Ontario saw periodic slowdowns on Friday as part of a “solidarity slowdown”  caravan down provincial highways.

Provincial police in various parts of Ontario reported vehicles travelling at between 50 kilometres and 60 kilometres an hour, causing rolling delays, but said the protests were peaceful.

Now, Wet’suwet’en Hereditary chiefs say they are holding a gathering of solidarity on Wednesday that is expected to attract Indigenous leaders from across British Columbia.

Chief Judy Wilson, secretary treasurer of the Union of B.C. Indian Chiefs, said she was planning to attend the meeting and other members of the group had already flown to Smithers.

“I’m heading up there to support the Wet’suwet’en hereditary chiefs and the people, the clans, in their fight to protect their land,” Wilson said.

She said the difficulty that the hereditary chiefs have had in getting their authority recognized by industry and government is familiar.

Elected band councils are based on a colonial model of governance, she said. Under the tradition of her Secwepemc First Nation in the B.C. Interior, title belongs to all of the people within the nation.

“Collectively, people hold title for our nation,” she said.

Coastal GasLink says it has signed agreements with all 20 elected First Nations bands along the pipeline route to LNG Canada’s $40-billion export facility in Kitimat, B.C.

While elected band councils are administrators of their reserves, the hereditary chiefs say they are in charge of the 22,000 square kilometres comprising Wet’suwet’en traditional territory, including land the pipeline would run through.

Members of the First Nation and supporters were arrested last week at a checkpoint erected to block the company from accessing a road it needs to do pre-construction work on the project, sparking protests Canada-wide.

On Thursday, the hereditary chiefs reached at deal with RCMP, agreeing that members would abide by a temporary court injunction by allowing the company and its contractors access across a bridge further down the road, so long as another anti-pipeline camp is allowed to remain intact.

Hereditary Chief Na’Moks told reporters that the chiefs reached the agreement to ensure the safety of those remaining at the Unist’ot’en camp, but remain “adamantly opposed” to the project.

The interim court injunction will be in place until the defendants, including residents and supporters of the Unist’ot’en camp, file a response in court Jan. 31.

A Facebook page for the Wet’suwet’en Access Point on Gidumt’en territory posted an alert on Sunday calling for rolling actions across the country.

It referred to the 1997 Delgamuuk’w case, fought by the Wet’suwet’en and the Gitsxan First Nations, in which the Supreme Court of Canada recognized that Aboriginal title constituted an ancestral right protected by the constitution.

“As the Unist’ot’en camp says, ‘This fight is far from over. We paved the way with the Delgamuuk’w court case and the time has come for Delgamuuk’w II,’ ” the statement says.

The ruling in the Delgamuuk’w case had an impact on other court decisions, affecting Aboriginal rights and title, including the court’s recognition of the Tsilhqot’in nation’s aboriginal title lands. (with CP files)