“Wow, can’t even begin to explain how proud I was of my community today. Not to mention the decent weather,” said Event Co-organizer Mike Hill. “Was so beautiful seeing so many people come out and support our two-spirit and LGBTQIA+ community. We had approximately 170 participants. Doesn’t even include the ones driving and volunteering.”

Biker riders, walkers, runners, rollerbladers, drivers and supporters met at Veteran’s Park Sunday afternoon to register and listen to opening remarks from Six Nations Elected Chief Mark Hill and several other event co-organizers. Riders set out around 2:30 p.m. on an 11-kilometre ride to Emily C. General School and back to the park for closing remarks and a thanksgiving. Kool Kids Ice and Water sponsored the event with free water and refreshments at the park and school. 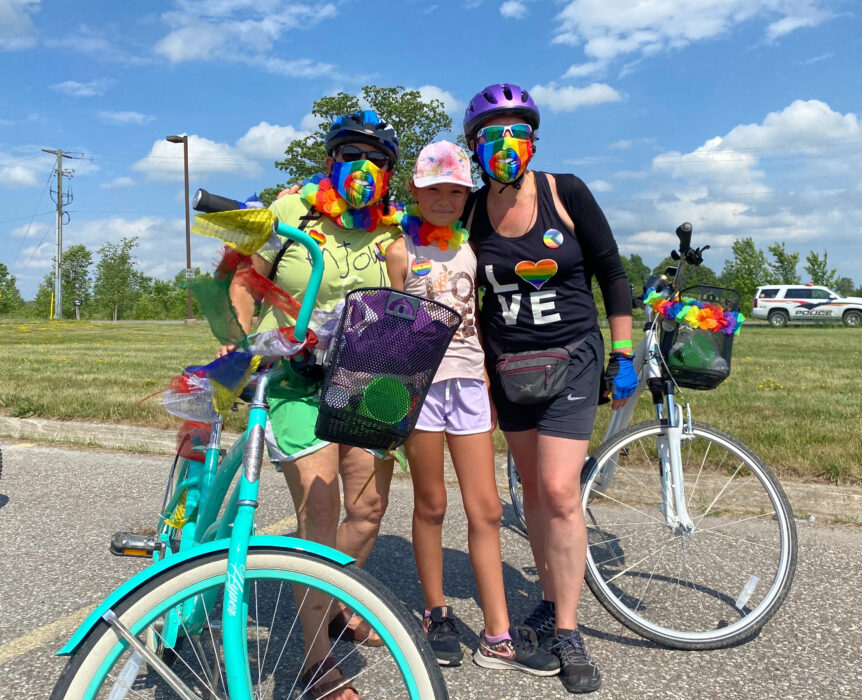 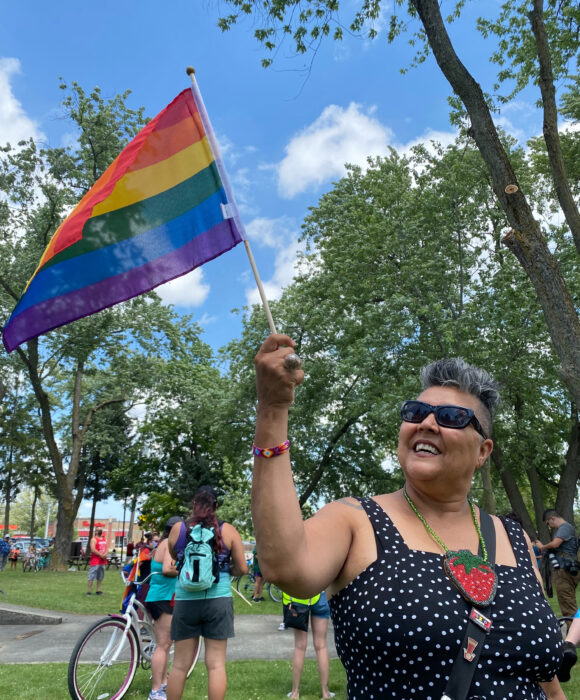 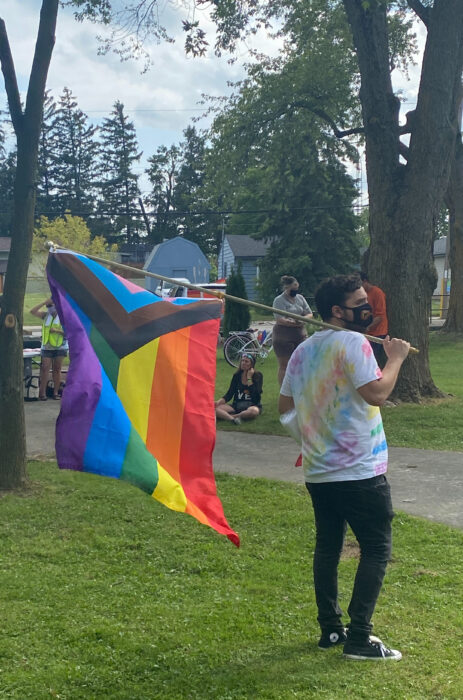 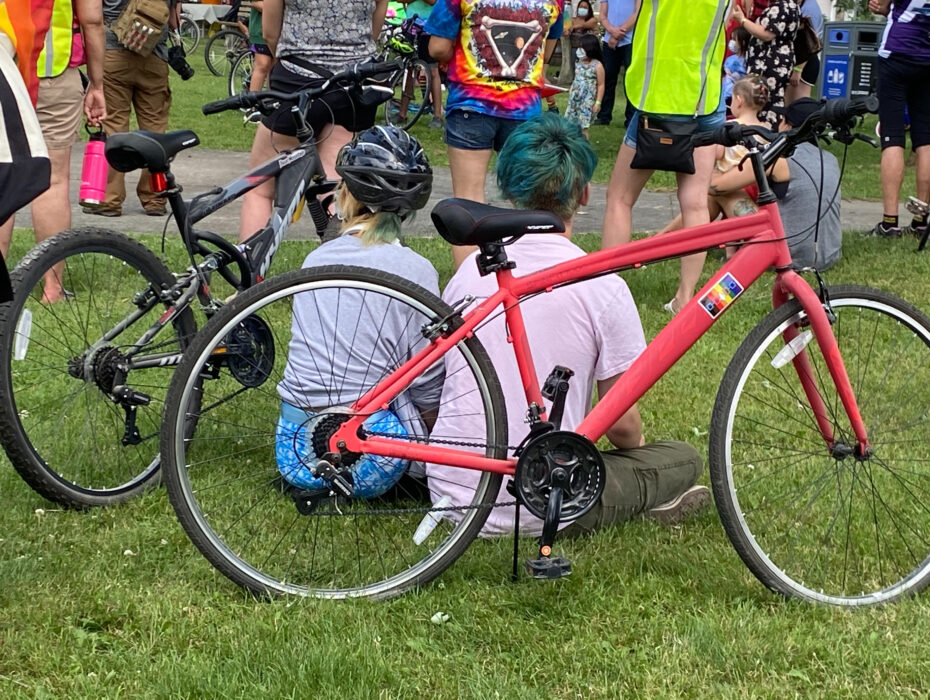 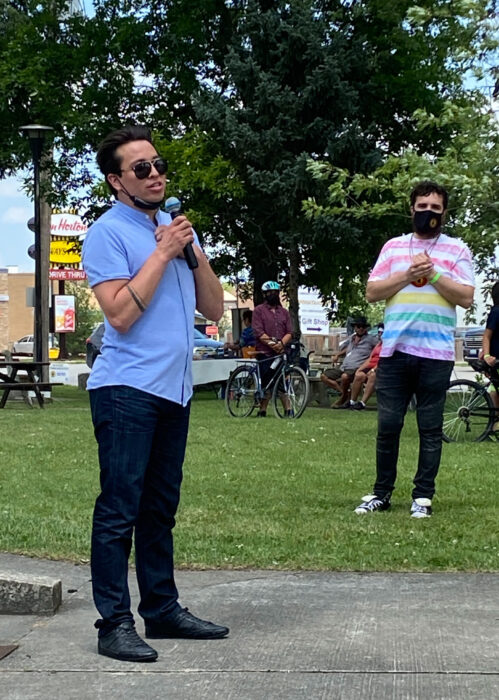 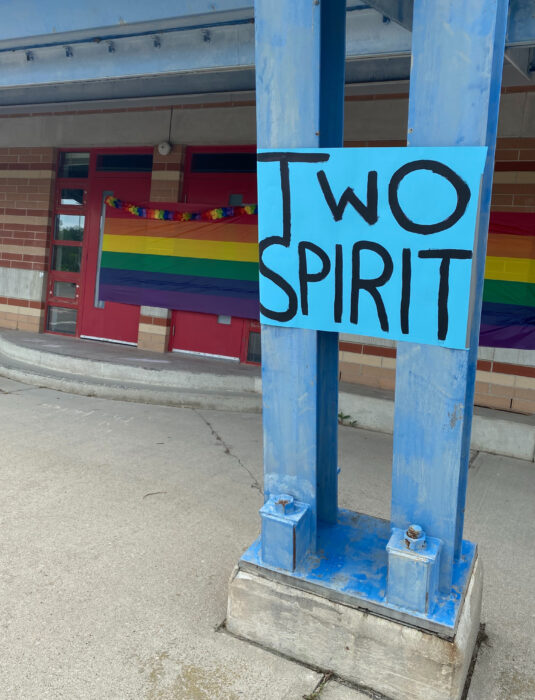 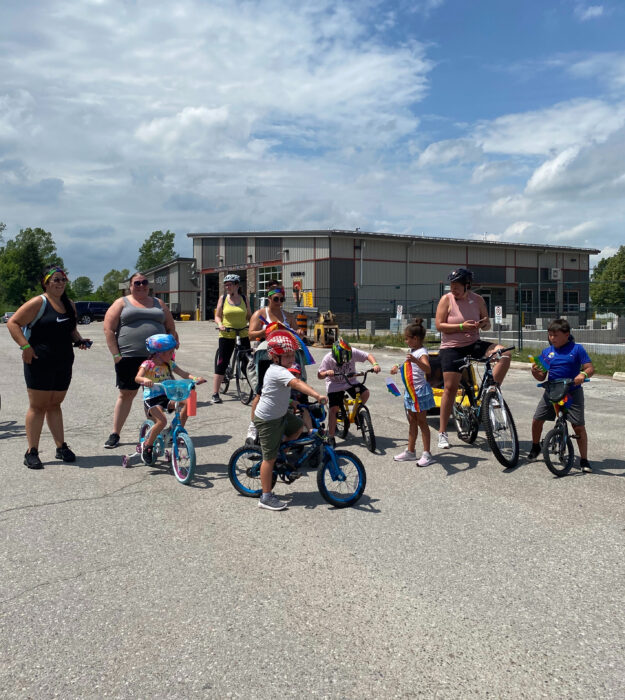 Remi Mari Sigel shared a piece of spoken word titled, “Love Is Love” which was followed by a short greeting from Elected Chief Hill.

“I want to take this opportunity to first and foremost say it’s a true honour to be here as part of the second annual Ride for Pride Event,” Elected Chief Hill said. “We need to be able to have that safe space and be able to support one another and motivate each other. As tough as it is, our community at times isn’t the nicest, and we need to be able to turn that into motivation, we need to be able to turn that into supporting systems. And on behalf of the 58th Elected Council we just really want to make sure that you all enjoy yourself, enjoy the day — it’s a beautiful sunshiny day. We really just want you all to know that you have an ally, as leadership, we’re here to support each and every one of you. We’re all in this together. Love is love.”

More people than not came dressed in outfits and costumes containing all the different colours of the rainbow. The event organizers and volunteers had some free swag to hand out if you had forgotten to bring your own. Items such as flags, stickers, water bottles, cooling towels, were all free to participants and supporters.

Many people and volunteers were involved in the ride’s success, but the main organizers were Mike Hill, Felecia White, Jenyka Webster, Jess Hill, Remi Mari Sigel, and Tehakanere HennyJack.

“I know this is making a huge difference in our community, especially for youth. I know it would have made growing up easier if I had this in the community when I was young,” said Mike Hill. “I’m grateful for the team, volunteers, businesses and organizations that stepped up and went above and beyond to make this possible.”

Last year’s event saw about 30 participants and was a spur-of-the-moment decision to organize. If one year later there was nearly 200 participants, the team said they are excited to see what the event on Six Nations could look like next year and years to come.

“We celebrate Pride not only as 2SLGBTQIA+ but also as Indigenous peoples because it was the church and state that traumatized both of our communities. Pride started out of protest against state-sanctioned violence against 2SLGBTQIA+,” said Mike Hill. “Still, 2SLGBTQIA+ youth have a lot of trauma growing up in their own communities and not being able to be themselves because of the homophobia/transphobia instilled in us by this euro-centric society and residential schools. We colonize ourselves by further projecting these foreign ideologies onto our people. We are all unlearning at our own pace. This is how we heal—coming together loving and supporting each other because that’s what anyone wants and needs.”