Ontario may be home to Niagara Falls, and Hamilton, the waterfall capital of the world, but Manitoba locals might say it’s Pisew Falls that takes top spot on Turtle Island.

At Pisew Falls, which means Lynx is Cree, the Grass River drops 13 metres, changes direction and jets down through a gorge. A short boardwalk leads to observational platforms, but the real beauty of the falls can be seen by stepping off and bushwhacking a few hundred yards.

“It’s one of those selfies that you know is a risk because it’s really dangerous past the boardwalk, but I’ve always done it, you just need to know where you can and can’t step,” said a hiker this July. The falls are located approximately 700 kilometres north of Winnipeg.

There has been one fatality at the falls in recent years, and a memorial trail-marker is there to attest to that fact. The ledges are steep, the fall is long, and the current below is swift. By staying on the observational platforms you still get a great view of the impressive falls.

Most locals know that Pisew Falls takes its name from the Cree word “lynx” and say it is because the sound of the hissing water bears a resemblance to the sound of this wild northern feline. But there is another similarly named river leading into the Grass River which eventually becomes Pisew Falls — Missipisew River. 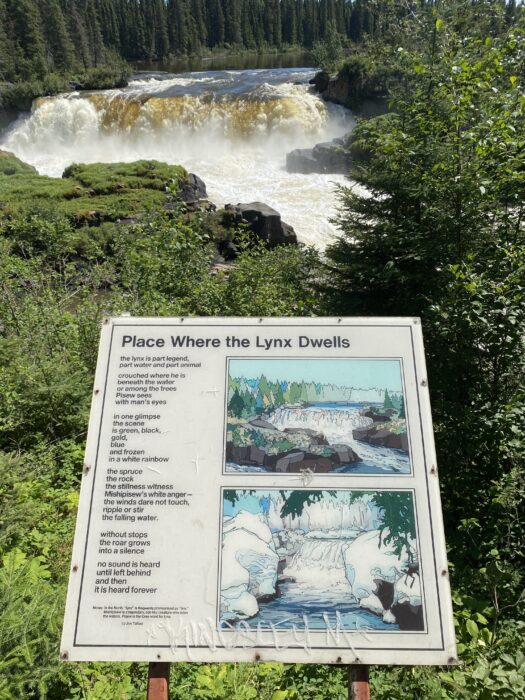 The word “missi” means “big or great.” Attach it to “pisew” and you get Missipisew — the great water lynx. Here the water lynx is seen as a mythological creature associated with safe water travel and good fishing. Missipisew lives in lakes, waterfalls and rapids where it’s known to throw canoe-tossing temper tantrums. Depending on the quality of paddlers’ offerings, Missipisew may protect or endanger them by thrashing its long, spiked tail to create turbulence and turmoil. If you’ve ever seen the falls or the rapids that span the lower falls, you’ll see Missipisew’s handiwork.

Because of the continuous flow of water over the falls, the localized area has developed its own microclimate, according to the Manitoba Department of Conservation. Its creation is due to the intensive geological activity in the area hundreds of thousands of years ago, when violent tectonic effects caused the creation of first a fault, and then an upheaval of the southern side of the fault line.

“A wide variety of mosses, lichens, and fungi can be found in the immediate area around the base of the falls. There are also a variety of ferns whose origins date back to before the last Ice Age. The dominant winter feature downstream and to the right of the falls is the ice that builds up on top of a small island there. This island only rises a few feet above the downstream water level in summer, but by late February, the ice accumulates to approximately three to five metres thick from the months of freezing spray,” states the department’s website. “At the periphery of this barrier between liquid water and frozen surroundings lies a thin ridge of plant growth that continues to survive throughout the harshest of the -45 C days in this frigid northern wilderness. Normally the process of photosynthesis ceases in the surrounding area.”

“This waterfall is really magnificent! I would love to come back to this place,” said a Tripadvisor review online.