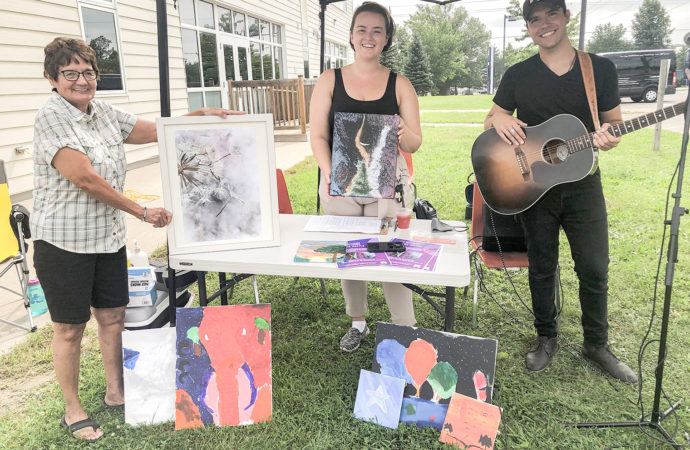 The Six Nations of the Grand River Hospice is expected to be up and running by summer 2023, according to the team of nurses spearheading this community-driven initiative. “The announcement was part of Community Awareness Week. We wanted to share where our team was at with progress on the hospice and give the community another

The Six Nations of the Grand River Hospice is expected to be up and running by summer 2023, according to the team of nurses spearheading this community-driven initiative.

“The announcement was part of Community Awareness Week. We wanted to share where our team was at with progress on the hospice and give the community another opportunity to provide input, “ said Lori Montour, Six Nations Long Term Care, Home and Community Care manager. “We handed out a questionnaire at the event, shared some designs of the future hospice, and shared where community members can send donations.”

The name of the hospice will be “She Carries the Truth” and was made possible by a donation from Glenn Styres in honour of his mother Vera Styres.

Hospice care is for people who are nearing the end of life. The services are provided by a team of health care professionals who maximize comfort for a person who is terminally ill by reducing pain and addressing physical, psychological, social and spiritual needs. To help families, hospice care also provides counselling, respite care and practical support.

Unlike other medical care, the focus of hospice care isn’t to cure the underlying disease. The goal is to support the highest quality of life possible for whatever time remains.

“It’s a homelike setting for people to come to at end of life and be cared for by trained staff. It creates a space for their end of life to be a good experience,” said Montour.

Home and Community Care Nurse Verna Fruch said she and Montour have been on this road for the last 10 years. And Palliative Care Case Manager Caroline Taylor-Hill is on the team now too.

“Palliative care is a specialty and at Six Nations we’ve had a palliative care program since 2003. We were fortunate to be involved with a research project through Lakehead University which was about improving end of life care on First Nation communities,” said Fruch. “We were one of four communities selected so we worked through that from 2010 to 2015 and we developed a lot of resources. Through that, we were able to set up a palliative care outreach team and we were mentored by a hospice in Brantford.”

Fruch said the team and her developed a traditional bereavement series from that research.

“Staff were educated and we had all our personal support workers trained in fundamentals of hospice palliative care,” she said. “We felt like all the stars were aligned and we were able to develop roles for palliative care managers like Caroline. Our long-term goal has always been a hospice.”

Fruch said that besides looking after a patient’s physical, emotional and spiritual needs, they aim to provide comfort too.

“We want to provide comfort for a patient. Walk with them on their journey through to end of life. And now we will have a hospice for them to stay at,” she said.

The proposed hospice will be the first First Nations hospice in Canada. The team says it is very important for First Nations people to be able to celebrate end of life how they would at home.

“A lot of people pass in hospitals and usually only one or two visitors are allowed. Even at surrounding hospices, there is limited room. Here we have large families and we all gather at end of life. It’s like a birth—everyone celebrates. Everyone wants to be there. That’s what can happen here,” said Montour. “We want to incorporate our customs, culture, and traditions. To allow space for families to be near. Those are things that are missing right now; our medicines and our caregivers. We want to be able to provide the care ourselves.”

Glenn Styres’ donation made it possible to move forward with plans for building the hospice, but there is still a lot of fundraising need for everything else involved.

“As of this year we have both federal and provincial funding, but it’s very minimal and the equipment we need is very expensive,” said Montour. “We need to do a lot of fundraising between now and when the hospice opens. We gratefully accept any donations towards the needs of the hospice. The Six Nations Health Foundation is an established charity and is willing to accept donations on behalf of the hospice.”

Anybody interested in donating to the hospice can send their donations to the Six Nations Health Foundation at 1745 Chiefswood Road, Ohsweken, Ont., N0A 1M0.

“This is a community-driven project, not something that the three of us came up with,” said Montour. “It came from strategic planning, focus groups, research and the community telling us what they want. We’re doing our best trying to follow the framework and make sure everything that needs to get done gets done. We want to have something we can pass on to future generations here.”