BRANTFORD — From the Hands of our Ancestors: The Art of Corn Husk opened this past weekend at the Woodland Cultural Centre and will remain open until February 15 of next year.

“I’m just honoured to be a part of something that celebrates our stories in a really traditional manner. My understanding is that cornhusk is a protector, since the time of creation it’s protected every kernel on every corn field, and it continues to do that. What I try to do, is use that cornhusk to try and protect the stories,” said Elizabeth Doxtater, quoted from a post made by the Woodland Cultural Centre to Facebook. 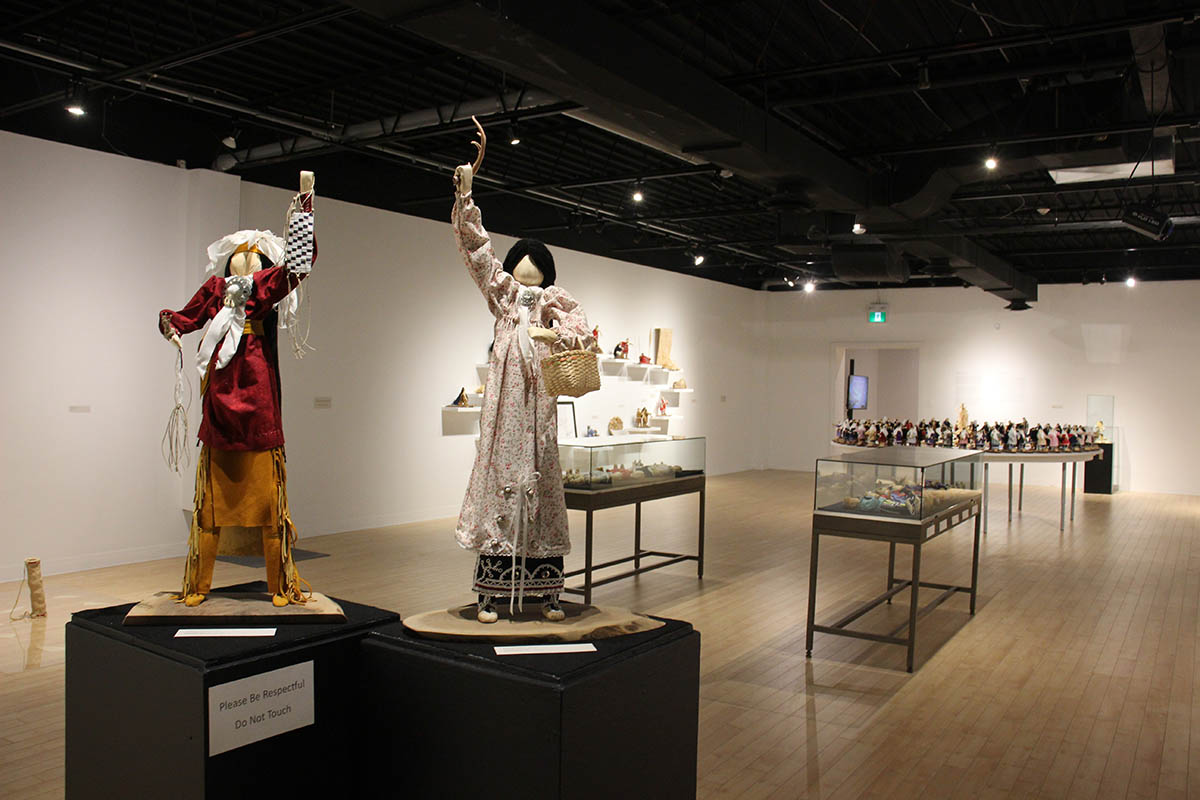 When walking through the exhibit, each piece truly tells a story.

From the Story of Creation to the story of the Peacemakers Journey, Doxtater utilized her skill to bring significant stories of the Haudenosaunee to life.

But her creations also mark a learning curve for visitors.

According to Doxtater of Everything Cornhusk, her shop and gallery located in the Ohsweken Village Plaza, the cornhusk doll goes back to the time of Creation when corn was first given to the Haudenosaunee people.

“If the character is sad or happy they can picture that emotion on the dolls face,” she said. “The cornhusk doll was created to entertain the children and to help the parents teach them values.”

The cornhusk doll is also intentionally faceless to remind the people to remain humble and not become consumed with their appearance. It also would inspire children to use their imagination when playing with the dolls.

Frazer Sundown, who also featured artwork in the exhibit, is said to follow the path of his elders and ancestors to bring a fresh, young, and vibrant perspective to the art of cornhusk.

“Proud to have this among the work of Elizabeth E.F. Doxtater! Working with corn husk also brings people together where language, culture, and history is passed on orally. That being said, working with corn husk is not only a revitalization of weaving, however it brings our culture alive in its truest form,” said Sundown, quoted from a post made by the Woodland Cultural Centre to Facebook.

Just last November, Doxtater was busy with a book launch at the WCC. Her collection of stories titled Dreamfast, A Trail of Stories to Lead You Home is a book that gathers and bundles snapshots of Haudenosaunee history, stories and life on the reserve into one.

The exhibit will be on display for the next three months.

Local News October 5, 2022 • 0 Comment
The imagineNATIVE Film + Media Arts Festival will be running again in Toronto, with a slate of in-person events set for Oct. 18 to 23,…

Local News October 5, 2022 • 0 Comment
The sound of happy little voices carried throughout the air while community members at Mississaugas of the Credit First Nation marked the second annual National…

Local News October 5, 2022 • 0 Comment
Six Nations Elected Council will be funding the Six Nations Santa Claus parade this year, as the beloved annual event became yet another casualty of…

Local News October 5, 2022 • 0 Comment
The school was originally named after a person who tried to erase Indigenous identity. Now, it’s named after the first Indigenous woman to become a…

Local News September 28, 2022 • 0 Comment
This week Hydro One shared plans for its new equity partnership model with First Nations on new capital transmission line projects. The value of these…