A photo of a Six Nations man bestowing an ‘Indian Name’ on Johnny Cash got some conversations going on indigenous media sources online last week.

The image, shows Joseph Logan, adjusting a Sioux style war bonnet on the head of John Cash as his wife stands by. The duo gave Johnny Cash the name ‘DaGynDaGeah” which means “He is Coming with the Song” and June Carter Cash was given a beaded headdress, and a wolf symbol necklace after receiving the name “GaGeCheWeeh” which means “Carrying Flowers”. 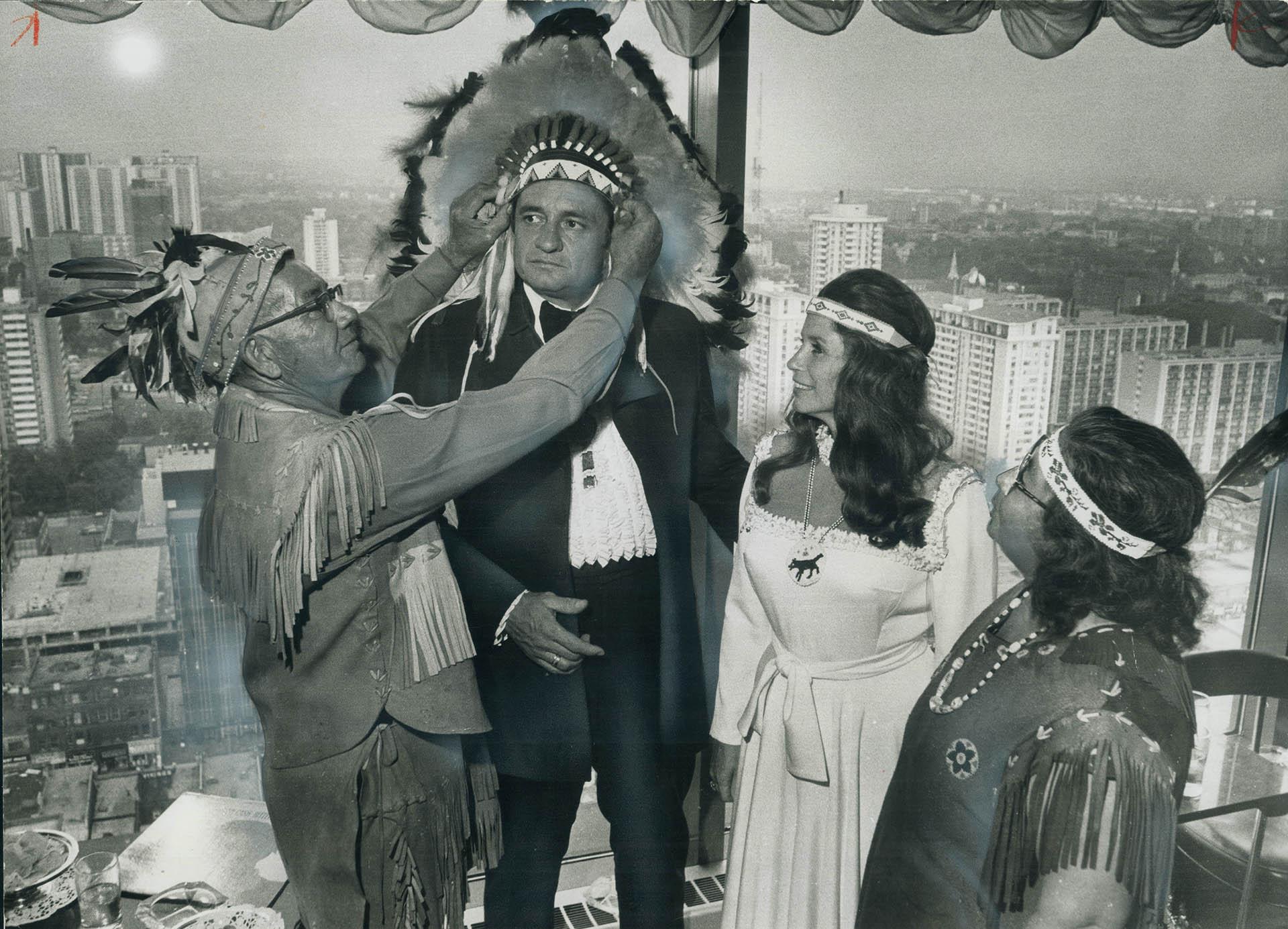 The original photo appeared in the Toronto Star following Cash’s performance at the CNE on August 24th and 25th in 1970. It said that Cash autographed his ‘Bitter Tears’ album and said it was “played every Sunday in the Iroquois village on Grand River”.

This was not the first time Cash was given an “Indian Name” by Haudenosaunee people.

In 1966, just after Cash released his ‘Bitter Tears’ album dedicated to American Indian activism — he was invited by the Senecas of Allegany where he was adopted into the Seneca Turtle clan for his work as ‘an indian rights champion’ recognizing his work to highlight the Seneca battle against the Kinzua Dam on the Allegheny River.

He was officially adopted in a public ceremony in front of 1500 people, including 200 indigenous audience members from Western New York reservations, on the stage of Melody Fair in North Tonawanda on June 25, 1966 and given the name ‘Hago’ata” which means “Storyteller”.

Nettie Watt, clan mother to the Allegany Seneca Turtles presented Cash with a pair of moccasins, Dorothy Jimerson gave him a beaded necktie and Stephen Abrams presented him with a headdress.

The man so nice, they named him twice.

When some of the actual Haudenosaunee people have never been named once. Something that is a sore point for many descendants of the Iroquoian nations.

Cash is just one of a large roster of non-Haudenosaunee people who were adopted and given names by the Haudenosaunee.

Some people were not only given indigenous names but made “honorary chiefs” of the Haudenosaunee.

His Majesty King George of England was named Onontehah and made a chief of the nation. 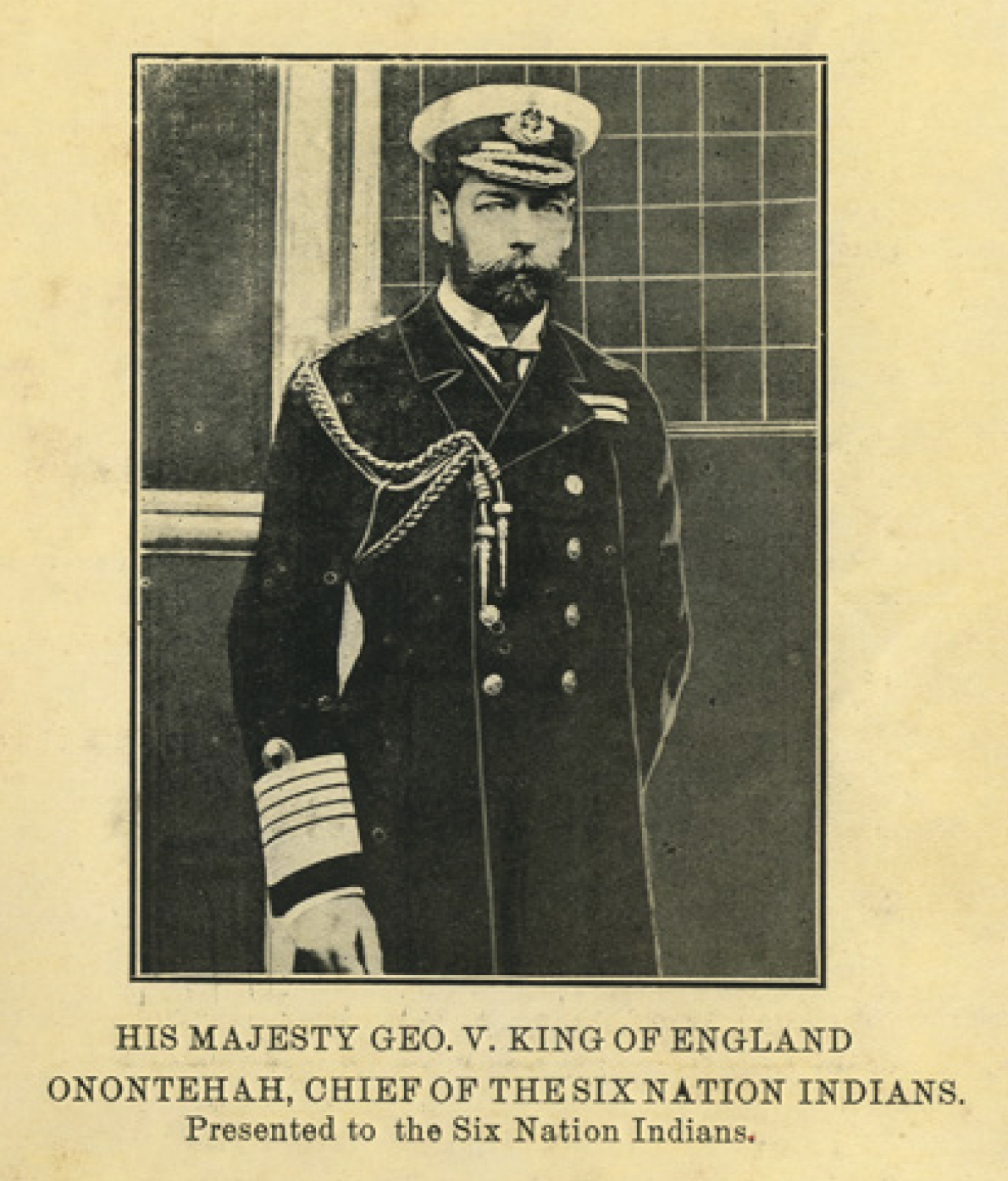 In his 1897 book “People of the Longhouse”, Edward Marion Chadwick, who was made honorary chief Thagoyohgwisaks, keeps a list of names of those who were adopted into the Haudenosaunee.

In 1869, Prince Arthur, the Duke of Connaught and Strathearn was given the name Karakonteh which means “Flying Sun”. His daughter Princess Patricia was also given a name.

The Earl of Aberdeen was adopted in October 1896 into the Seneca Turtles and was given the name Deorounyathe which means “Bright Sky”.

Allen Cleghorn, who was a Brantford man who got the Brant Memorial in Victoria Park installed, was adopted into a Bear clan during a grand council in 1856 and was given the name Karihowane or Kariwiho. His adoption was considered a special affair and he was granted at seat at council and had what seems like an open invitation to return to his seat when required. Cleghorn repaired and decorated the interior of the Mohawk Chapel at his own expense.

Robert William Barker was adopted into the Bear clan and given the name Karihontyeh. He was the Inspector of Post Offices.

Indian department official Absalom Dingman was also adopted and given a name though it is not listed.

Reverend Robert James Robert, a missionary with the New England Company, was adopted into the Bear Clan and given the name Deyonronhyateh.

Duncan Milligan, also a member of the New England Company, was adopted into the Deer clan and given the name Sakoyanehhawe.

Missionary Reverent Robert Cameron was adopted into the Wolf clan and given the name Dehorihwatheh.

Captain Edwin Duncan Cameron, Superintendent of the Reserve, was adopted into the Cayuga Bear clan and vine the name Dehaswatdatwa.

Major Edward Marion Chadwick was adopted by the Mohawk Turtles and given the name Shagotyohgwisaks which means “one who seeks a gathering of the people” in reference to his formation of a Six Nations militia.

Honorary chieftainships were bestowed upon many people including —

Honourable Walter Humpries Montague – a doctor and MP for Haldimand.

Lewis Henry Morgan was adopted into the Seneca Hawk clan and given the name Tayadawahkugh which means “one lying across”. His adoption was noted to be an honour for efforts to halt a land grab by the Ogden Land Company in the 1840s.

Lieutennant-Colonel Robert Lottridge Nelles, Kahnedogonah which means “Among the Pines” by the Oneida Wolf.

Charles Bernhard Heyd, Tayendanehgeh who was the MP for South Brant.

Levi Secord, a physician of the Brantford Reserve and adopted by the Bear clan given the name Kyehonhanoronh.

Another physician, H.R. Frank, was also adopted and named but his name is not listed.

Former honorary chiefs were listed as —

Hugh, second Duke of Northumberland was given the name of Thorigowegeri — “the evergreen brake” which was alluding to him possessing a hereditary title.

His son — Hugh, third Duke of Northumberland was given the name Deyonhighkon. The sis also a hereditary title Deyongeghweh.

Col. John Graves Simcoe, Lieutenant-Governor of Upper Canada from 1792-1796 was given the name Deyonguhokrawen said to mean “one whose door is always open”. Members of his staff were also adopted when they traveled to Grand River on March 6, 1793.

Col. James Fitzgibbon was named Thoriewayarie for his part in the war of 1812.

Sir John Alexander MacDonald, Prime Minister of Canada, was given an indigenous name though it is not noted.

Lieutenant-Col. Jasper Tough Gilkison, Superintendent of the Grand River Reserve from 1862-1891 was adopted by the Wolf clan and given the name Sojijowaneh.

The former principal of the Mohawk Institute, Archdeacon Abram Nelles, was named Shadekareenhes which means two trees of equal height”.

There are also white women who were named —

Ms. Margaret Priscilla Cameron, Konwahendeks which means “A leader”, was adopted by the Cayuga Bear.

Mrs. Converse, Yearihwanonneh of New York was adopted by the Snipe clan.

Mrs. Mary Emily Rose Holden, Karihwenthawi was adopted by the Onondaga Beavers for her work with the Wentworth Historical Society.

Mrs. Maggie Merritt, Kanoronhkwa was named “One who loves” and was adopted by Cayuga Bears. She was the wife of Captain William Merritt.

Miss Catharine Nina Merritt, Kariwenahwe, was the granddaughter of the Hon. William Hamilton Merritt. She was adopted by the Onondagas, in part for her work in writing a play “When George the Third was King” in 1897. She cast real indigenous people from Six Nations to play the indigenous characters in the play.

Editorial November 30, 2022 • Comments off
he Haudenosaunee Confederacy Chiefs Council has been long criticized for their lack of transparency and accountability with the Six Nations people. Now, they are being…

Mohawks and ‘such others’: the ancient multi-national village of Onaquaga

Editorial November 23, 2022 • Comments off
Of the 1843 people who settled at Grand River after the American Revolution, there were two people groups who arrived here in 1784 who identified…

Editorial November 9, 2022 • Comments off
One of the less talked about wars that Six Nations warriors at Grand River participated in was the Upper Canada Rebellion in 1837-38. During that…

Editorial November 2, 2022 • Comments off
There is a beautiful tradition among the people of the Confederacy and those who follow the Great Law of Peace that has been the inspiration…

Editorial October 26, 2022 • Comments off
There was a lot of culture sharing when settlers came to these lands. In particular with the Iroquois people. Dutch, German, Scots, and English peoples…

Editorial October 19, 2022 • Comments off
Throughout the indigenous world there is a saying — “we belong to the land”. It is a multi-faceted expression with many interpretations, one of them…

Editorial October 5, 2022 • Comments off
Across Ontario, Quebec and the United States there are a total of 15 communities occupied by the Mohawk, Oneida, Seneca, Cayuga, Onondaga and Tuscarora people…

Editorial August 31, 2022 • Comments off
By Bradley Bryan There is a common misconception among Canadians that Indigenous people do not pay any taxes. It perpetuates harmful stereotypes and hinders non-Indigenous…

Editorial August 24, 2022 • Comments off
Recently, some of the hereditary chiefs and their supporters came out to condemn the elected leadership’s use of language and the word Haudenosaunee in their…