SIX NATIONS — So thinks, the 2014 Minto Cup champs and President of the Six Nation Arrows Jr. A Lacrosse Club, Lewis Staats. The Arrows are hosting their first benefit poker tournament this Saturday. 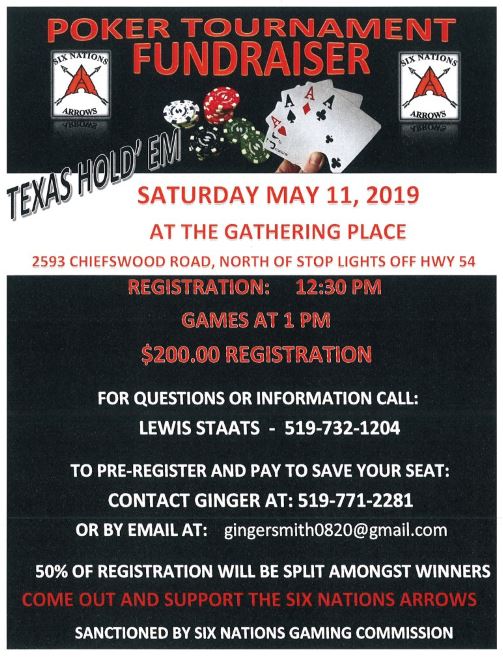 Staats says there is a $200.00 entry fee to play for a 50/50 split with the Arrows and a 1:00 p.m. start at the Gathering Place by the Grand, 2593 Chiefswood Road. The tournament is sanctioned by the Six Nations Gaming Commission.

Poker’s popularity experienced an unprecedented spike at the beginning of the 21st century, largely because of the introduction of online poker and hole-card cameras, which turned the game into a spectator sport. Not only could viewers now follow the action and drama of the game on television, they could also play the game in the comfort of their own home.

Broadcasts of poker tournaments such as the World Series of Poker and World Poker Tour brought in huge audiences for cable and satellite TV distributors.

Because of the increased coverage of poker events, poker pros became celebrities, with fans all over the world entering into tournaments for the chance to compete with them. Television coverage also added an important new dimension to the poker professional’s game, as any given hand could now be aired later, revealing information not only to the other players at the table, but to anyone who cared to view the broadcast.

Staats says the upcoming tournament is a Texas Hold-Em tournament. “We tried a tourney back in January but had some bad weather and not much turnout.”

“Because the team players are aged 17-21 a lot of the lacrosse players won’t be signing up for the tournament. But they are all promising to attract one player each”. Staats added, “we hope to have a tourney every couple months. It’s how we are going to win that Minto Cup and the national championship again in 2019”.