OHSWEKEN — Six Nations Elected Council members marched back into the Six Nations Central Administration building Monday morning, escorted by police and about 200 community members supporting the police carrying out an injunction and the removal of protesters from the front lawn.

Now police are investigating a break-in to Elected Chief Ava Hill’s office and SAO Dayle Bomberry’s office. An official source told TRT several documents and a computer were stolen, along with damage to the building that is now being assessed.

Currently employees have returned to the building but members of the public are not being allowed entry while the building is being assessed by police.

Six Nations Police said they will remain on scene for the day and until the Elected Council are able to secure permanent private security.

The rear parking lot of the building was littered with broken beer bottles and spilled sewage. Police said a large trailer that had been serving as a washroom on site spilled raw sewage onto the street leaving an acrid smell in the air.

The building has been blocked by protesters since May 27 who originally gathered in solidarity with national demonstrations against the federal governments Recognition of Indigenous Rights Framework — a wildly contentious action that has been compared to Pierre Trudeaus assimilationist 1969 White Paper.

That demonstration turned into a two month protest, preventing Six Nations Elected Council, it’s employees, guests and members of the public from entering the building — unless the elected council signed a letter surrendering governance to the Haudenosaunee Confederacy Chiefs Council.

Protesters blocked access to the building, resulting in the physical assault of SAO Dayle Bomberry. A Six Nations woman and leader of the protests, Rhonda Martin, is now facing assault charges in that instance. Martin claims her actions were in self-defence and has sought charges against Bomberry.

One elected councillor, Melba Thomas, was targeted during her attempts to access the building. Protesters shouted at the elected official, arguing with her and calling her a “motherf***er” in what protesters were claiming was a peaceful protest.

Just a few weeks later, on June 28, Thomas’ home was completely destroyed in what is believed to be an arson. Police continue to investigate. Six Nations Elected Council removed elected councillors contact information and home addresses from their website following the fire at Thomas’ home.

“I think it’s time to get back to work,” said Six Nations Elected Chief Ava Hill. “They said it was going to be a one day — it’s turned into two months. We’ve got to continue to provide benefits to the community.”

Chief Hill said, “I want to thank the staff and the community members for supporting us and being there for the last couple of months. We’re glad to be back in here I think it’s time.”

Six Nations Elected Councillor Mark Hill said, “The main concern is always everyone’s safety. We wanted this to be as peaceful as possible. I feel like we’ve done enough. We accomplished a lot and I feel like there is a good outcome of this: it raised awareness and started conversations. Hard conversations that need to be discussed. Now it’s time that we have to come together. That’s the biggest part of it.” 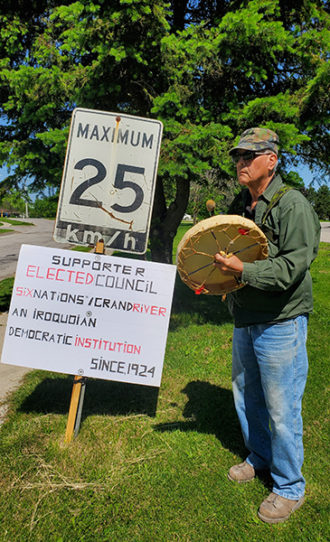 Doug Whitlow, a Six Nations resident who attended today’s reclamation of the council building said, “It’s long overdue. It should have never been allowed to go this far. They should have took it down the first day it was up. People have to realize we live in a democratic society. Essentially the confederacy chiefs council has no power to do anything. They’re an outdated form of government that don’t belong in this century — from my point of view.”

Several of the protesters involved at the Central Administration building were the same individuals named in conjunction with the hereditary chiefs in an injunction against protesters obstructing completion of the Niagara Reinforcement Project – a Hydro One power line crossing the territory. In that case, protesters were demanding Hydro One end a deal giving compensation to Mississaugas of the Credit and Six Nations – and instead sign an exclusive $250,000 deal with the hereditary chiefs Haudenosaunee Development Institute.

The hereditary governance model struggled at the turn of the century, both in serving the needs of a diverse population of both Longhouse and Christian people with differing worldviews — and to keep up with the demands of modernity.

By 1923 — after decades of community members demanding the federal government intervene and install an elected system — the federal government launched a Commission to investigate the affairs of the Six Nations people. That investigation concluded with a report to the Privy Council and an order on September 17, 1924 to dissolve the hereditary council and install an elected system of governance.

That order was carried out on October 7, 1924 when a delegation of four people — RCMP officers Inspector Frere and Lieutenant Bridges, Indian Affairs Superintendent Lieutenant Col. C.E. Morgan and a reporter from the Brantford Expositor travelled to Six Nations to deliver the message.

Since that time, supporters of the hereditary chiefs have attempted to unify to reclaim their governing authority — several times leading to similar actions of a group of people blocking access to the council building.

In the 1970s a group of hereditary system supporters padlocked the doors of the Ohsweken council building shut, refused to allow the elected council members access to the building and began advocating for a return to the hereditary chiefs controlling the affairs of Six Nations.

The elected council pursued a permanent injunction which proceeded through Ontario courts as a case known as “Isaac v Davey”. That ended in a landmark decision at the Supreme Court in 1977 that said the elected council was the official governing body of the people of Six Nations.

That case was cited by lawyers for the current elected council seeking an injunction earlier this month to remove protesters outside the Central Administration building.