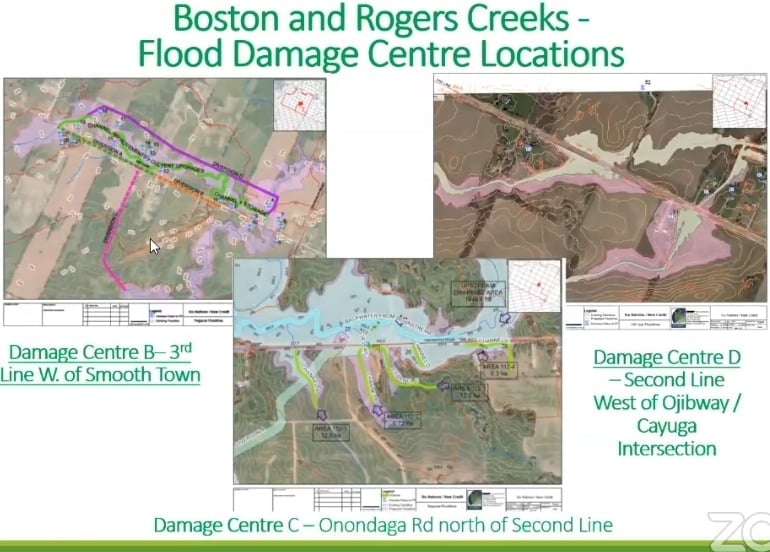 Six Nations of the Grand River Elected Council has agreed to move forward with a flood mitigation plan for the territory but coming up with the funding will be a challenge.

The approval includes spending $200,000 of Six Nations’ money with the suggestion to seek the funding shortfall from the federal Small Communities Fund, a $109 million federal infrastructure program.

The plan is the result of five years of study on two major creeks in the community prone to flooding: McKenzie Creek and Boston Rogers Creek.

As part of the study, Greenland Group surveyed all the culverts and bridge crossings on the territory.

They put in stream flow guages and weather guages during the study.

Greenland did a cost-benefit analysis to determine whether it would cost more to implement flood protection measures than it would cost to fix the damage that could be caused by flooding as it happens.

“When you go to secure funding, the province will want to know how you did your calculations,” said Greenland Group Senior Associate Engineer Don Moss.

There were five flood damage centres identified on McKenzie Creek.

Most of the flooding occurred on the creek’s tributaries, said Moss.

They suggested ditch improvements and culvert upgrades to minimize the impacts for some areas.

During the study they found driveway culverts were backing up flows near Fourth Line and Seneca Road and when they got opened up, it reduced flood levels significantly.

Annual damage costs estimated for the five flood areas were just over $605,000, with the majority, about $466,000, occurring during flooding near the Six Nations health centre and Iroquois Lodge parking lots.

A cost-benefit analysis showed that repairs save the community millions of dollars over a 50-year timespan through mitigation measures, as opposed to fixing the damage as it happens.

Some of the diversion methods for those areas were prohibitively expensive and were screened out early, said Moss.

They looked instead at flood-proofing several homes, as well as some culvert and ditch improvements, for those areas.

The next steps will include conducting topographical and geotechnical surveys before finalizing designs and putting out tenders.

Greenland Group suggested council make an application to the Small Communities Fund to help fund the construction of the flood mitigation strategy.