It’s a notable loss for the Six Nations community this week with the sudden passing of businessman and philanthropist Ken Hill.

Grand River Enterprises President Steve Williams announced Monday morning that Hill, 62, died in Miami. Hill was one of the founders and majority stakeholder in the on-reserve tobacco manufacturer.

The time and cause of his death have not been made public.

Hill was one of the most prominent and successful indigenous business owners in Canada — more recently holding the title of GRE’s Marketing Director along with business partner Jerry Montour. GRE made international waves in indigenous tobacco, exporting Six Nations made cigarettes to markets in Germany, the Bahamas, and the USA. Outside of the elected council, GRE is the largest employer on Six Nations — simultaneously becoming and building the employment infrastructure that shifted Six Nations into being a community-led by indigenous entrepreneurs and self-determination.

Hill served on the Six Nations Elected Council for three consecutive terms from 1986-1991.

Hill was a noted philanthropist, renowned for his generosity to the Six Nations community in particular — but also to other indigenous nations across North America.

Under Hill’s leadership, GRE donated millions to the Six Nations Fire and Emergency Services to construct the critically needed Fire Station in Ohsweken. For decades, Hill’s companies fully-funded the annual Indigenous People’s Day carnival on June 21 for community members to enjoy free of charge. Similarly in 2015 Hill began hosting Victoria Day celebrations at Beaver’s Corners with free food and events for all. 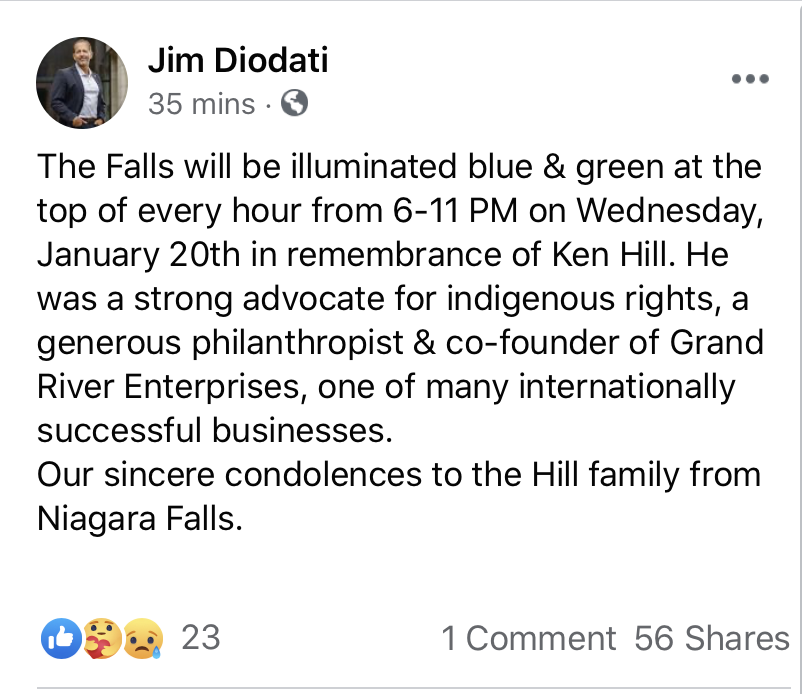 He was fundamental in establishing and funding the Dreamcatcher Charitable Foundation, which has donated millions to indigenous youth across Canada funding extra-curricular sports, art, and health initiatives for individuals. The foundation also covered the entire cost for flying in materials and experts to build a state of the art playgrounds on nearly every remote First Nation in Ontario as part of an ongoing project.

Hill was a noted advocate of local sports — supporting the Six Nations Pro-Fit Chiefs and co-owner of the Brant Golden Eagles, later becoming the Caledonia Corvairs. In 2014, Hill acquired the former Cayuga Speedway and revitalized the site launching Jukasa Motor Speedway in 2018.

Hill launched the Jukasa brand in the early 2000s following the devastating loss of his nieces Justine, Karen, and Sarah. Under the brand, he launched the Speedway, the state-of-the-art, and award-winning Jukasa Studios, Jukasa School of Recording Arts, a full suite graphic design studio Jukasa Designs. In 2015, Hill launched a Jukasa Radio — again creating new infrastructure for the Six Nations community and employment opportunities for indigenous people in media and the arts.

In 2019, after the devastating Hurricane Dorian hit the Bahamas, Hill co-ordinated a charitable drive among local businesses at Six Nations and the surrounding area along with the Dreamcatcher Charitable Foundation, Seminole Nation, and GRE to deliver three jets filled with critically needed water, emergency relief supplies and clothing to bring to the hardest-hit regions in the islands.

Hill also made charitable donations to individuals in need throughout the community, often contributing to individual families to support with funeral expenses, medical costs, building homes for elders and space for ceremonies.

There is no doubt that the Six Nations community will continue to prosper, in no small part, because of the charity and love of Kenny Hill.