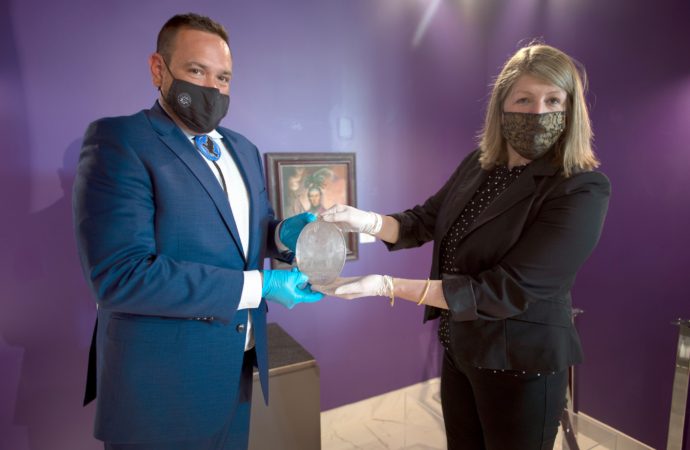 SALAMANCA, NY — A historical medal belonging to Seneca chief Red Jacket has been returned to the Seneca Nation. The medal, which bears great significance to Haudenosaunee history, was officially repatriated to the Seneca peoples after more than half a century by the Buffalo History Museum. The ceremony was held at the Onöhsagwë:de’ Cultural Center,

SALAMANCA, NY — A historical medal belonging to Seneca chief Red Jacket has been returned to the Seneca Nation.

The medal, which bears great significance to Haudenosaunee history, was officially repatriated to the Seneca peoples after more than half a century by the Buffalo History Museum.

The ceremony was held at the Onöhsagwë:de’ Cultural Center, where the medal will be housed and on display for public viewing.

“This medal represents what lives inside each and every Seneca – the heart of a sovereign people and our rightful recognition as such,” said Seneca Nation President Matthew B. Pagels. “This is our identity as a Nation. It cannot be owned, bought or sold. It belongs to all of us and is passed from generation to generation so it can live forever.”

The medal was gifted to Red Jacket, a Seneca leader who was a noted orator, by George Washington in 1792 to commemorate the discussions that led to the Treaty of Canandaigua of 1794, in which the Seneca Nation played a key role.

The Seneca Nation submitted a formal request for the repatriation of the Red Jacket Peace Medal in October 2020, and it was returned early this month. 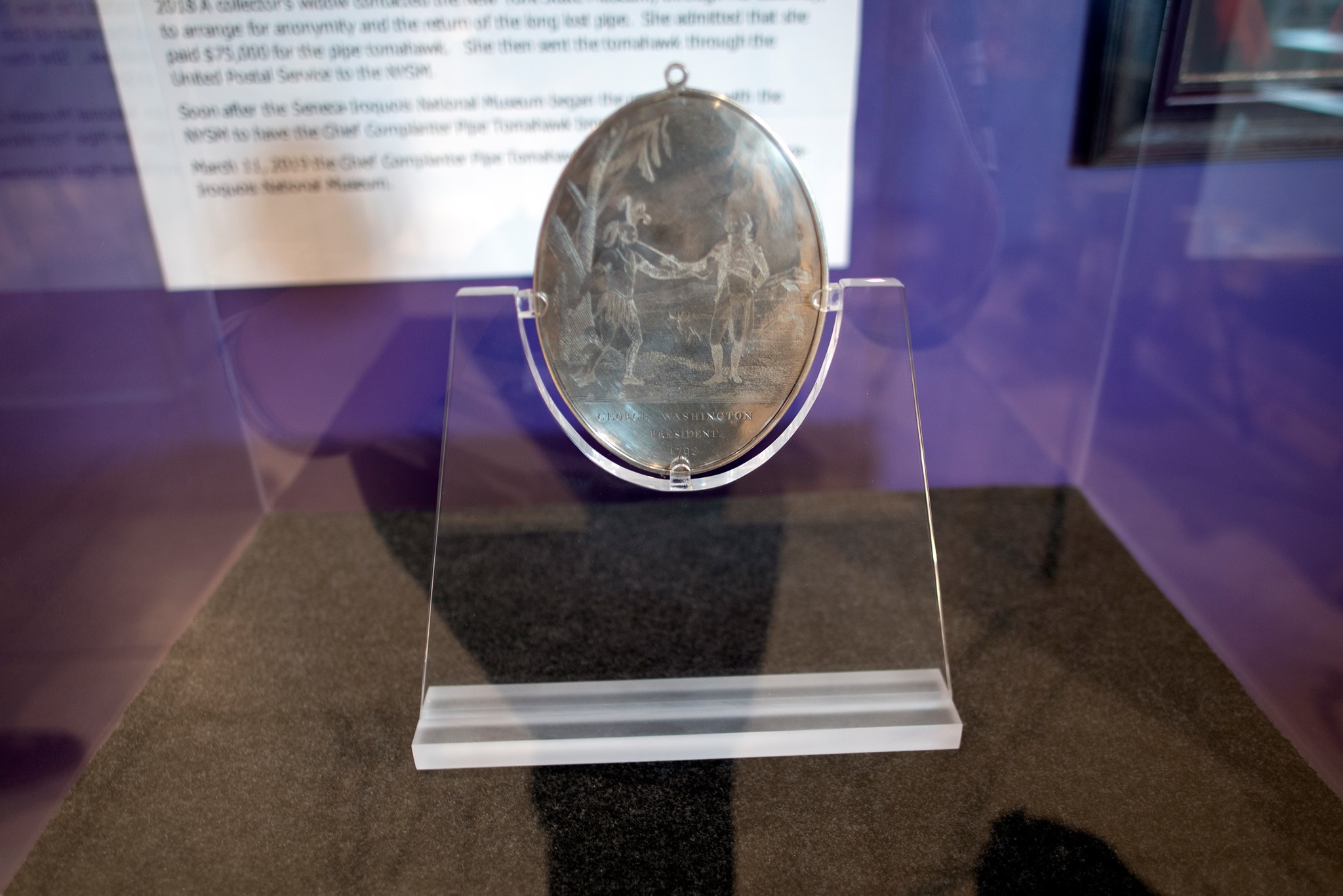 According to Seneca Nation officials, the Native American Graves Protection and Repatriation Act (NAGPRA) defines cultural patrimony as objects with ongoing cultural importance to a tribal nation, rather than property owned by an individual. The Red Jacket Peace Medal fits this description and cannot belong to any individual or museum; it is inalienable and belongs to the Seneca People as a collective.

“I like to remind the United States that the Haudenosaunee – especially the Seneca play – an important role in your early survival; that is what I see when I look upon the medal,” said Dr. Joe Stahlman, director of the Seneca-Iroquois National Museum. “We need to have moments of reconciliation. There are things from the past that still matter to many of us of here today and we need to talk about them. We need to all heal and find peace.”

“The importance of returning these artifacts to their rightful custodians is also a tremendous opportunity,” U.S. Senate Majority Leader Charles Schumer said in a congratulatory letter to the Nation. “It is incumbent upon all of us to ensure the contributions to our national culture and heritage are preserved and well-understood. The vibrant thread the Seneca Nation has woven into our national tapestry deserves to be celebrated. The repatriation of Red Jacket’s medal is a significant cause for celebration.

“I applaud The Buffalo History Museum for their decisive action to return the Red Jacket Peace Medal to its rightful owners, the people of the Seneca Nation,” said New York State Senator Sean Ryan. “The repatriation of Indigenous artifacts is an important process in building strong, meaningful, and peaceful relationships between Native American territories and their surrounding communities. The return of the Peace Medal – an explicit symbol of this relationship – is an especially significant act, and a momentous occasion here in Western New York.”

“I’m delighted that this amazing piece of history, which is a treasure to both the Seneca Nation and the United States of America has been returned to its rightful home,” said New York State Senator George Borello. “President George Washington presented this medal to Chief Red Jacket as a symbol of the peace and friendship between the then-new United States and the Six Nations of the Iroquois Confederacy to commemorate the talks that resulted in the Treaty of Canandaigua, signed in 1794. That peace and friendship endures today as evidenced by today’s repatriation ceremony.”

“As a steward of local history, the Museum will continue to dedicate itself to reassessing its own collection and history of artifact acquisition, so that action can be taken to ensure any artifacts of cultural patrimony are rightfully returned,” said Buffalo History Museum Executive Director Melissa Brown. “Much like what the Peace Medal represents, this is a sign of friendship and connection between the Museum and the Seneca Nation. As we move forward, we look to collaborate with the Nation to ensure the legacy of Red Jacket and the history of the Seneca Nation throughout our future exhibits, programs, and community events.

“It has truly been my honor to oversee the medal’s safe keeping these past thirty-one years, and it is an even greater honor to be here to see it rightfully returned,” said Walter Mayer, Senior Director of Museum Collections at The Buffalo History Museum. “It is an important historic artifact of cultural patrimony and the events surrounding its 1792 presentation still play out to this day.”

US to review dark history of Indigenous boarding schools

Mann Cup Cancelled for Second Season in a Row