MISSISSAUGAS OF THE CREDIT FIRST NATION — An OPP officer has died after a pursuit of a vehicle theft progressed into a collision, shooting and manhunt that lasted most of Tuesday evening.

Grzegorz (Greg) Pierchala was shot and killed in the line of duty Tuesday afternoon. He was 28 years old.

The officer was responding to a vehicle that had entered the ditch in Hagersville/Mississaugas of the Credit First Nation around 2905 Townline Road.

Police confirmed that Pierchala was shot twice and transported to hospital where he was pronounced dead.

It is with an extremely heavy heart that I regretfully advise that #OPP Provincial Constable Grzegorz Pierzchala was killed today while courageously serving in the line of duty. Our hearts are with his loved ones and all OPP members at this tragic time. #HeroesInLife pic.twitter.com/6m5Q1jiYQP


OPP surrounded the Mississaugas of the Credit First Nation as reports of the suspects, a male and female, fled onto the reserve.

Pierchala was a new officer, having just joined the OPP in the last year. He was stationed at the OPP Haldimand Detachment.
‘
Ontario Premier Doug Ford sent his condolences via Twitter on Tuesday evening calling the incident “horrific”.

I am horrified by the killing of an on-duty OPP officer. Thank you to the officers who apprehended the suspects without incident.

Our first responders are true heroes. We share in the pain felt by family, friends and the entire police community as Ontario mourns this loss.

The vehicle was later recovered at a Mississauga Road address between Ojibwa Road and Highway 6. The suspects fled on foot into the bush and were the subjects of a massive manhunt, with both OPP and Six Nations Police assisting, an on-foot search by Brant OPP K-9 unit and an air search by police helicopter, using infrared heat scanners.

An emergency alert notification was issued by OPP at 5:44 p.m.. across most of Southern Ontario advising people in and around Hagersville to shelter in place, identifying the suspects as Randall McKenzie, 25, and sharing the image of an unidentified female. 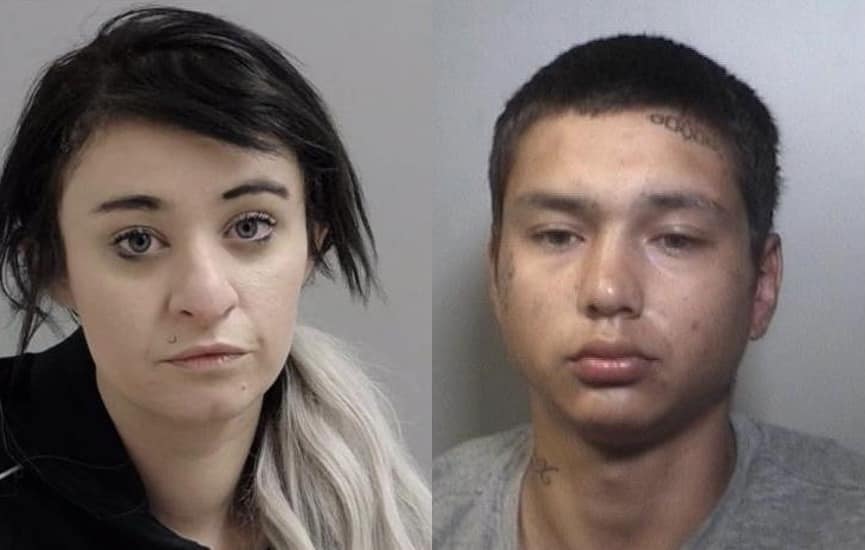 The suspects were then identified as follows:

2. A Caucasian female, 25-30 years old, red pinkish short hair. A photo of the female was included in the Shelter In Place warning, but no other details were available at the time of posting.

Police surrounded the southwest corner of the concession with high beams pointed into the bush line around the southwest perimeter of the block as air teams guided officers on foot to track the suspects.

A female suspect was apprehended by police at around 6:30 p.m. Tuesday evening.

Residents nearby said they heard a single gunshot fired just prior to the suspect being arrested.

Mississaugas of the Credit First Nation has opened their community hall for a safe togetherness space for people affected by the incident Tuesday evening until 11:00 p.m. and say resources for help will be available for the community tomorrow morning.

We send our condolences and heartfelt prayers to the family and friends of the OPP Officer who was tragically shot and killed today.

Both suspects have now been apprehended and are in custody. https://t.co/VpOYPihsjb

Six Nations Elected Council Chief Mark Hill issued a statement Tuesday evening saying, “I was heartbroken to hear of this tragic incident as a result of a senseless act of violence, and of a young life taken so soon in the line of duty. I am sending my sincere condolences, thoughts, and prayers to Officer Pierzchala’s loved ones and the entire OPP family for this immense loss.”

Hill said, “I also want to thank the Ontario Provincial Police, the Six Nations Police, and all other services who supported this operation for their swift apprehension of the suspects and for continuing to keep our communities safe. I have spoken with Chief LaForme and offered any services they may need to support the Mississaugas of the Credit First Nation community at this time.”

Haldimand Mayor Shelley Bentley issued a statement Tuesday saying, “I am deeply saddened by the loss of one of our officers, who died today in the line of duty. Every day, our County’s first responders risk their lives for the safety of our community and a tragedy like today’s is one we hope never comes. Our hearts go out to the officer’s family, his OPP colleagues, and all first responders impacted by this horrific event. On behalf of the County, I would like to express my deepest condolences and support. I know there’s nothing I can say to lessen this tragic loss, but to all who are grieving, know that the community grieves with you.”

OPP said further details about the suspects, and any pending charges will be forthcoming as the investigation continues.