SIX NATIONS – After a tumultuous off-season, the Canadian Lacrosse League (CLAX) is getting set for its third season, which begins February 1st. This year, there will be only one Six Nations franchise as the 2013 Champions, the Iroquois Ironmen, sponsored by Slack Lumber, were absorbed into the 2012 Champion Ohsweken Demons for the 2014 professional lacrosse season.

The Ironmen and Demons played against each other for the 2013 Champions Cup.

Returning to the ILA this coming CLAX season is former Jr. A Arrows Express coach Randy Chrysler as head coach of the 2014 Demons.

“It really felt good walking back into this arena,” said Chrysler. “There are a lot of good memories here.”

With him behind the bench will be Randy’s brother Roger Chrysler, Ron “Mouser” Henry and Travis Hill.

“I know Randy is going to keep the team on track and in the right frame of mind,” says team president Vince Hill. “He is a good leader and both he and his brother have had success wherever they have been. He has the ear of the players. I was looking for that winning attitude and the discipline he brings is what it takes to win a championship.”

Although he missed celebrating the Minto Cup when he coached the Arrows, Chrysler brought a professional discipline to a highly talented Arrows franchise, which was losing games because of undisciplined play and undisciplined practice attitudes.

“Everybody knows how much talent there is at Six Nations,” Chrysler told the young players when he took the Arrows job. “But everybody also knows how to beat you. Taunt you into fights and get you mad and you forget about the game.”

The new discipline didn’t happen quickly or easily that first year and some players balked at having to follow his regimen. Those players either left, or eventually came around and helped lay the foundation for the current Minto Cup winning franchise.

He is now working with some of those same players he coached as Jr’s, who are now vying to be a part of the 2014 Demons organization.

The inaugural CLAX champion Six Nations Iroquois Ironmen franchise was absorbed into the 2013 Champion Demons for the 2014 year. During the off-season, rumours abounded that the new league was in trouble at the upper-management level. Most of those concerns, which were never made public, have been resolved, and the third season is a go, according to Vince Hill.

“Internally, we have done some restructuring,” says Hill. “Charles Way and Demon Hill are primary owners of the league. We will not be running this year with a commissioner, but rather a committee. That’s probably the biggest change.”

The league is also courting a new franchise in Tuscarora and has offered potential investors a rare opportunity to try it on and see how it fits.

“Tuscarora will have a team testing the market with four games played in Cattaraugus this year, which will count, but they are not actually in the league as yet,” says Hill.

Hill realizes that he has about 90 good quality Native players to choose from, while the other teams can draw talent from all of Canada. But that has not stopped owners Nancy and Demon Hill from hoisting the cup in the first two years of the league’s existence.

“They (the other teams) are always after our guys down here, but we’re not releasing anybody,” says Vince Hill. “If we do anything it will be through a trade to get fair return. If there is a release, it will be only a one-year release with the right of recall.”

That being said, he also says he will never hold one of his players back if they get called up to the National Lacrosse League.

“It’s all about the players,” says Hill. “We’d like to see them, especially the Native players, move up to the next level and we won’t hold anybody back. If they get a call, we wish them the best and we’ll let them go.”
The former Durham Bulldogs will be reorganizing in the London area, but will play some of their home games at the ILA.

The Canadian Lacrosse league is a semi-pro league and would like to move towards finding a way to link up with the National Lacrosse League as a farm club system, similar to the American Hockey League’s affiliation with the NHL. 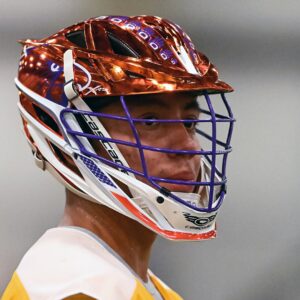 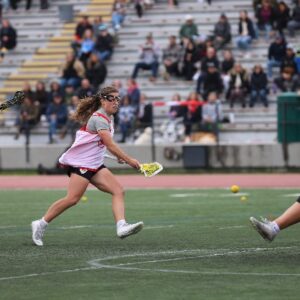