SIX NATIONS — In 1923, Cayuga Chief Deskaheh was the official delegate representing Six Nations of the Grand River Territory, and he was creating an embarrassing report for Canada on the world stage. He was in England and Europe exposing the decades and generations-long mistreatment, frauds and outright thefts of Haldimand Tract land and hundreds of thousands of dollars of Six Nations money that had seemed to be disappearing under the government controlled Six Nations Trust Fund.

The Canadian Prime Minister at the time was W.L. MacKenzie King. At the time he was trying to get Canada recognized by the world as a Nation, as opposed to a Dominion of Great Britain. Deskaheh’s  international lobbying for a voice at the League of Nations at The Hague, Netherlands, a sort of world court organized shortly after WWI.

Deskaheh was gaining momentum and even overshadowing King’s efforts to make Canada a recognized Nation, independent from Britain. It was making him and Canada look bad on the world stage.

One of the original bonds that was sold in the early 1900s. FILE PHOTO
The result was an all out effort by Britain and Canada to stop Deskaheh’s efforts in having the Haudenosaunee, accepted as an independent Nation by the new world alliance. The cost of this effort was extensive and Six Nations had to find a way to help subsidize Deskaheh’s efforts and pay for lawyer fees, lodging, food and travel. The government refused to allow Six Nations to use its own Trust Fund money in the legal defence of Deskaheh and his mission.

The Mohawk Workers organization, of which Deskaheh was a member despite being Cayuga,  stepped in and provided some funding for his efforts since the Confederacy could not send support since they themselves were blocked from their own account.

The Chiefs came up with a plan that might help. Selling Six Nations Bonds was the answer to the roadblock. A letter was released to Six Nations residents from Ohsweken, drafted by Confederacy Treasurer, Chauney Garlow, explaining the situation and offering residents of Six Nations a chance to help preserve their way of life and sovereign entity, by investing in Six Nations Bonds.

In response to this maneuver, King’s Canada went on full attack against the Six Nations efforts to remain sovereign. After illegally blocking Six Nations Trust Account, he unilaterally revoked the 1794 Jay Treaty, which is an agreement signed by the United States and Great Britain in to allow Canadian born Native Americans to travel freely across the U.S./Canadian border. The “Jay Treaty” recognized that, “The Indians dwelling on either side of the…boundary line…{shall have the right} freely to pass and repass by land or island navigation…and to navigate all the lakes, rivers and waters thereof, freely, to carry on trade and commerce with each other.

That move stranded Deskaheh in the USA, who found residence with Tuscarora Chief, Clinton Rickard in Rochester New York. He became ill and because of the revoked Jay Treaty, he was unable to return to Six Nations for traditional medical care, nor was his family able to attend him. Deskaheh died of pleurisy in 1925, in Rochester. That meant he was not present when the RCMP took over by force the Six Nations and imposed a puppet government in 1924.

But in 1927, a year before the bonds were to mature, Canada found a way out by reneging on the promise to underwrite the bonds making them, utterly worthless. Some of these bonds still exist today forgotten in the pages of old books on dusty shelves somewhere.

In light of the present accusations facing the American President of collusion with a foreign power to commit a crime, Britain is certainly equally guilty. It was a young Winston Churchill who under British, Prime Minister, David Lloyd George, refused Six Nations’ attempt to speak with the King; another promise broken. He sent Deskaheh and his lawyer George Decker back to Canada to deal with King and Scott.

Just to ensure Six Nations couldn’t regroup and start another appeal, King instituted a new law that even blocked Six Nations access to Canadian court system from 1927 until 1951.

“Every person who, without the consent of the Superintendent General expresses in whiting, receives, obtains, solicits or requests from any Indian any payment or contribution of promise of any payment or contribution for the purpose of raising a fund or providing money for the prosecution of any claim which the tribe or band of Indians to which such Indian belongs, of which he is a member, has or is represented to have for the recovery of any claim of money for the benefit of said tribe or band, shall be guilty of an offence an liable on summery conviction for each such offence to a penalty of not exceeding $200 and not less than $50, or to imprisonment for any term not exceeding two months.”

Collusion at every turn and it laid the tilted foundation of Canadian law when it comes to the Onkwehonwe, or their land and treaty rights. 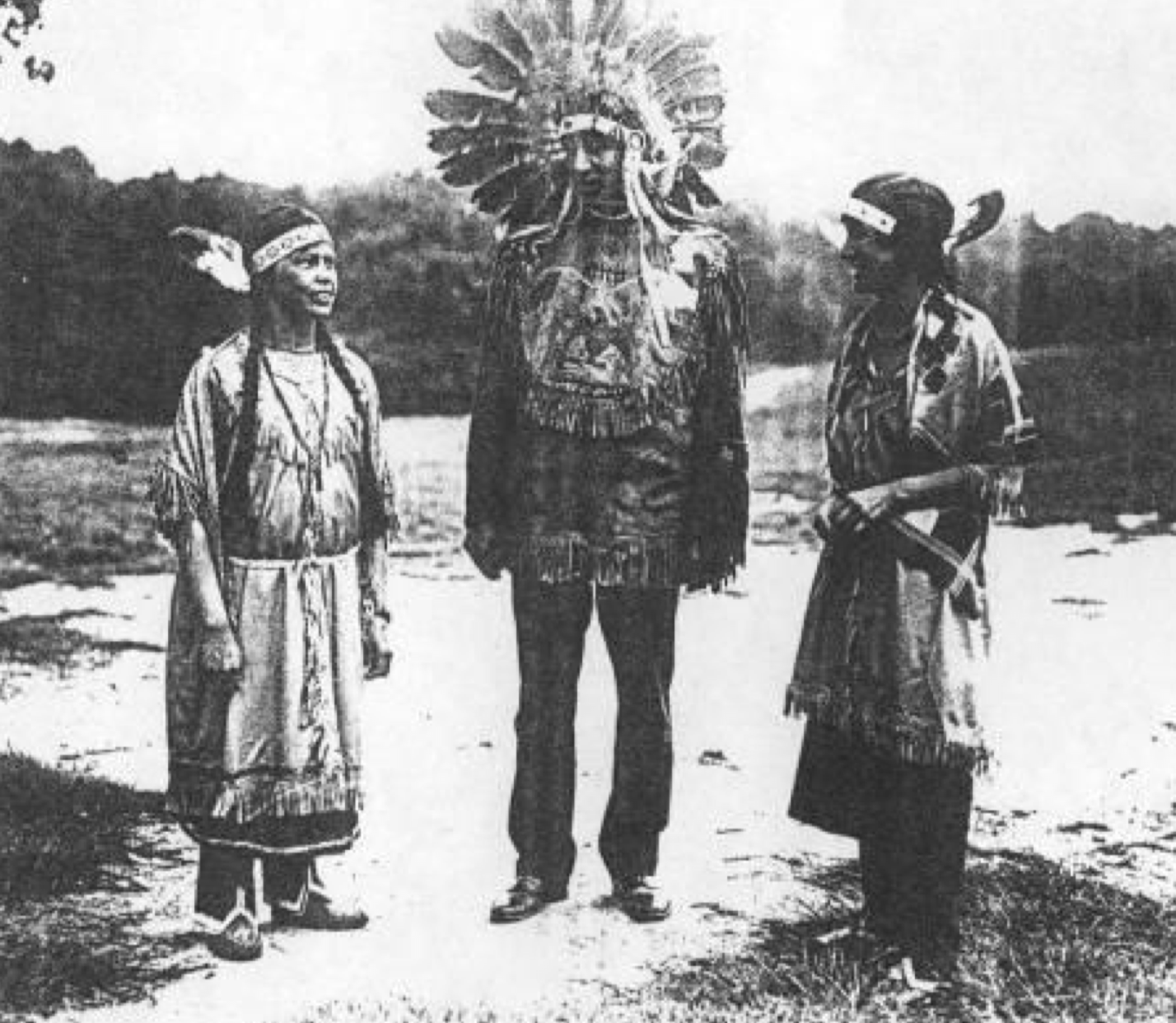 Our people are Iroquois who live on lands along the Grand River north of Lake Erie, where they settled in 1784 on invitation of the British Crown under a treaty arrangement promising them protecting and giving them these lands in place of their old home-lands south of the Lakes as a reward for their services under their alliance with the British. We are now seeking our right to home rule, which is threatened by the aggressive attitude of the Dominion of Canada in the extension of its laws and authority over us.

Having failed to secure recognition of our rights by appeal to the British Crown, we now seek the aid of the League of Nations. To enable us to make that appeal we desire to raise funds to defray the expense of a delegation to Geneva to present our case.

Our people are the owners of a large fund now in the hands of the Dominion Government arising from sales of lands to the British Crown. Applications for an accounting of that fund and for the payment of any part of it to our people have been refused by the Canadian government two years last past.

By the report of the Auditor General of the Dominion of Canada for the year 1920-21, Part 1, Indian Appears Department, made 1-7, the Dominion Government States that the balance of the capital of this fund on March 21st, was $709,188.64. The interest account as of the same date shows a debtor amount to the Six Nations of $65,666.06, and disbursements of a similar sum.  Among the disbursements was included a per capita distribution made that year to the Six Nations people in an aggregate of $29,655.96. There has been no per capita distribution made since.

By act of the Six Nations Council, a bond issued in the amount of $10,000.00 has been authorized. The issue is divided into two denominations, one of 100, $50. Bonds, and one of 100, $50 Bonds, both payable January 1st, 1928 with interest at the rate of 6% per annum in Canadian legal tender, and the fund of the Six Nations held by the Government of the Dominion of Canada is pledged to secure the payment of these bonds with interest.

Our people have little left of these Grand River lands originally given to them, a tract of 50,000 acres and upwards, long ago divided into convenient farm from which we have sustained ourselves by farming. Our population is now 4,500 souls. This land lies near the City of Brantford and is conveniently reached by the T.H.&B, Grand Trunk, and the Michigan Central lines.

No prior pledge of this fund has ever been made. Should the Six Nations be unable to collect from the Canadian Government sufficient of the funds to retire this bond issue, we will be able to raise by taxation of ourselves the funds necessary to pay off these bonds.

Application for these bonds may be made to the undersigned, Newport P.O., Ontario, Canada.

The Haldimand Proclamation – marking 238 years of the Promise, the Pledge and the Proclamation.

Historical October 26, 2022 • 0 Comment
THE STORY Although the Iroquois nations had officially declared neutrality during the Seven Years War between Britain, France and Spain — and the war concluded…

Historical February 9, 2022 • 0 Comment
OHSWEKEN — It’s a romance story for the ages, the kind that makes your hairs stand on end — two people from different worlds —…

Historical January 20, 2022 • 0 Comment
MOHAWK VILLAGE, SIX NATIONS – It seems the abuse of indigenous children at the infamous Indian residential schools knew no bounds at all. This time,…

Historical November 10, 2021 • 0 Comment
OTTAWA – At the advent of WW1, there were many Six Nations young men who signed up for service in the Canadian Military which made…

Historical November 10, 2021 • 0 Comment
SIX NATIONS — Imagine poking around the internet and discovering you are a direct descendent of the founder of one of North America’s first Native…

Archival documents reveal student cause of death at residential schools

Historical September 29, 2021 • 0 Comment
OTTAWA — It is a long and boring process for those not so inclined, but to those of us who have a gluttonous curiosity for…

The government wanted to ignore, hide Haldimand awarding land to the Mohawks