JAMES SMITH CREE NATION – Saskatchewan Mounties surrounded a house on the James Smith Cree Nation Tuesday after a reported sighting of the suspected mass murderer but left soon afterwards with no sign of the man.

Emergency alerts blared yet again. A helicopter flew overhead. A tactical armoured vehicle arrived on site, driving past a checkpoint where reporters were kept. Shortly after, police vehicles left the scene and Myles Sanderson remained at large more than 48 hours after the stabbing attacks. 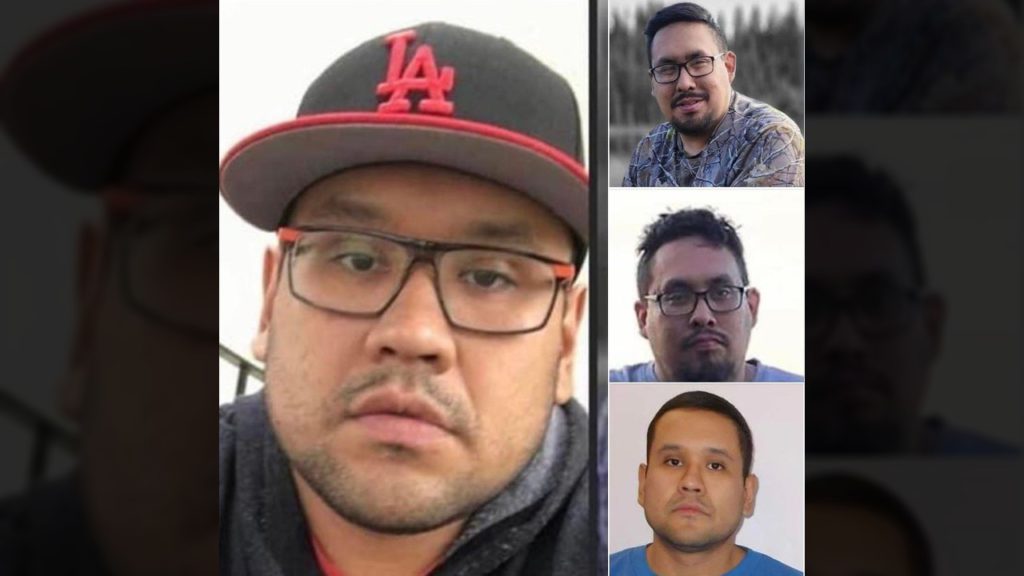 Residents in a community already grieving the loss of so many were left on edge as another lead on the suspect seemed to run cold.

“Further investigation has determined that Myles Sanderson is not located in the community of James Smith Cree Nation and the RCMP continues to search for him,” a notice sent via Saskatchewan’s emergency alert system said.

Sanderson, 32, is one of the accused in the stabbings over the weekend at several locations on the James Smith Cree Nation and the nearby village of Weldon, in which 10 men and women were killed and 18 were injured.

RCMP have said his brother, Damien Sanderson, who had also been a suspect in the killings, was found dead Monday in a grassy area not far from one of the crime scenes. Police have said they don’t believe Damien Sanderson killed himself and are investigating whether Myles Sanderson was involved in his brother’s death.

The Saskatchewan First Nations Veterans Association confirmed the death of Earl Burns in a Facebook message, saying he was a veteran with the Princess Patricia’s Canadian Light Infantry.

His sister confirmed his death in a statement to news website paNow in Prince Albert. Deborah McLean told the outlet her brother died protecting his family and that his wife is in intensive care.

The Saskatchewan Health Authority said 10 of the injured victims remained in hospital Tuesday, including three in critical condition.

Police have been searching a wide area for the remaining suspect, with alerts issued in Manitoba and Alberta as well. In Regina, a three-hour drive south of James Smith Cree Nation, police reported a possible sighting on the weekend of a vehicle the suspects had driven.

“Do not let strangers inside your homes or answer the door for anyone you do not know. Please keep all windows and doors locked,” community leaders wrote in a safety notice posted online Tuesday.

Leaders of the Federation of Sovereign Indigenous Nations issued an appeal to find Myles Sanderson, begging those with knowledge of his whereabouts to come forward to help end the manhunt without any more loss of life.

A former Mountie said the vast open spaces of the Prairies could complicate any manhunt.

“This is a huge area, and there’s a whole lot of nothing,” said retired RCMP officer Sherry Benson-Podolchuk. “There’s a lot of places people can hide.”

Benson-Podolchuk noted that police are monitoring roads going into and out of adjacent provinces.

“Suspects aren’t going to go on the (main) roads. If they can take a side road or a gravel road or a dirt road somewhere, they will do that,” Benson-Podolchuk said.

Parole documents show Myles Sanderson has a nearly two-decade-long criminal record, which included convictions for assault, assault with a weapon, assaulting a peace officer and robbery. The parole board said he had propensity for violence when intoxicated.

“Your criminal history is very concerning, including the use of violence and weapons related to your index offences, and your history of domestic violence,” said the document obtained by The Canadian Press.

Sanderson received statutory release from prison in August 2021, but it was revoked about four months later because the board said he failed to communicate with his parole supervisor.

In the document, the board said it decided to reinstate his statutory release with a reprimand, and said Sanderson “will not present an undue risk to society.”

In May, a Crime Stoppers bulletin was issued for Sanderson, warning he was unlawfully at large.

The Mounties have not said what motivated the attacks. Police believe some victims were targeted, but others were chosen at random.

People in the region have rallied around the victims and the communities affected.

An online fundraising effort has begun for victims and their families in James Smith Cree Nation. It had raised more than $104,000 as of Tuesday afternoon.

A community garden organization near Prince Albert posted on social media that it is sending produce to the First Nation for wakes and other gatherings in the days ahead.

“We will be cleaning carrots, cucumbers and potatoes to send for the wakes. If you can help pick, peel or cut we will need a few extra hands please,” read the post on Jessy’s Garden Facebook page.

In nearby Melfort, Sask., on Monday night, the Mustangs Junior A hockey team held a moment of silence for the victims ahead of their pre-season game against the Nipawin Hawks.

Saskatchewan Premier Scott Moe and First Nations leaders held a moment of silence Tuesday at the opening of a hockey complex on the Big River First Nation some 180 kilometres away from where the stabbings took place.

“Those of you that have friends and family in the James Smith community or Weldon, or are impacted in any way, please know that all of this province’s heart is with you and your family this weekend and the weeks and months ahead,” Moe said.