HAMILTON – Six Nations business are responding to the Hurricane Dorian disaster by sending half a million dollars worth of immediate relief directly to Abaco and Grand Bahama Islands in The Bahamas.

Six Nations businessmen Ken Hill and Jerry Montour spoke with Two Row Times Wednesday morning and shared details about Grand River Enterprises’ immediate relief effort — along with 43 local businesses and families to respond to the disaster — bringing together about $500,000 in supplies directly to the heart of the disaster zones.

Hill told TRT “When I saw the things on the news and made a couple of phone calls. There’s families still today, trapped with their children in their attics with no food and no water,” said Hill. “They’re hurting. They’ve lost relatives, they’ve lost family. They’ve lost everything in their homes. They have nothing except for maybe the clothes on their back.”

The devastation Hurricane Dorian left in The Bahamas is catastrophic. The death toll now sits at 20 souls and officials say that number is expected to rise.

For two days the storm slowly tracked across the islands of Grand Bahama and Abaco with sustained winds of up to 185mph.

Hill said the Grand Bahama International Airport in Freeport was completely destroyed in the hurricane leaving the island with no place to recieve air deliveries. CNN reported the walls and ceiling were ripped apart and the runway was underwater.

Local governments also haven’t been able to clear boat traffic to the area because of residual stormy conditions. Because of all of this, Hill said survivors are completely isolated from relief, and says local governments are saying they don’t expect water or air access to be safe for some time.

Hill said GRE stepped up to respond to the disaster, donating two jets and a cargo plane to carry the goods to Nassau, Bahamas. Hill said the Seminole Tribe at the Hard Rock Casino in Florida also pledged two helicopters to meet the caravan of jets in Nassau where they will start transporting chopper loads of water, diapers, baby formula, sanitary pads, clothing and other supplies directly to the heart of the disaster zones in Freeport and Abaco.

Dreamcatcher Charitable Foundation’s Chairperson Delby Powless said the relief effort was close to his heart. “We have a lot of Bahamian friends and family down there and when they hurt, we hurt. To go down and help them, that’s something special to us. I know they’re in need so we’re here to help. That’s what Dreamcatcher does, we’re here to help. It’s our people — they are native people too, to the Bahamas. And we’re native people here all in to help each other.” 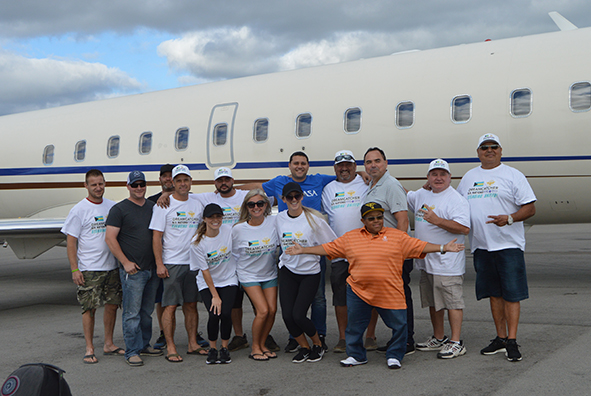