OTTAWA – Although there may be evidence pointing to the direct involvement of residential school priests, principals or other staff in the death of Residential Schools over the years, the majority of the paperwork filed to Indian Affairs is for accidental, “misadventure,” or sickness related deaths. Many times, however, some of these sickness related deaths could have been avoided with better medical attention administered by the nuns and priests at the schools.

In the National Archives at Ottawa, are hundreds of letters of correspondence between school administrations and the Department of Indian Affairs, under its many changing names.

One such case involves young John Jack, student number 220 at the Kenora Catholic-run residential school, in 1938. As in most cases, an inquiry was conducted into the student’s death, which consisted of the department having the school nurse or principal filling out a standard form. In most cases, that was all that was required, so calling it an investigation was cursory at best. 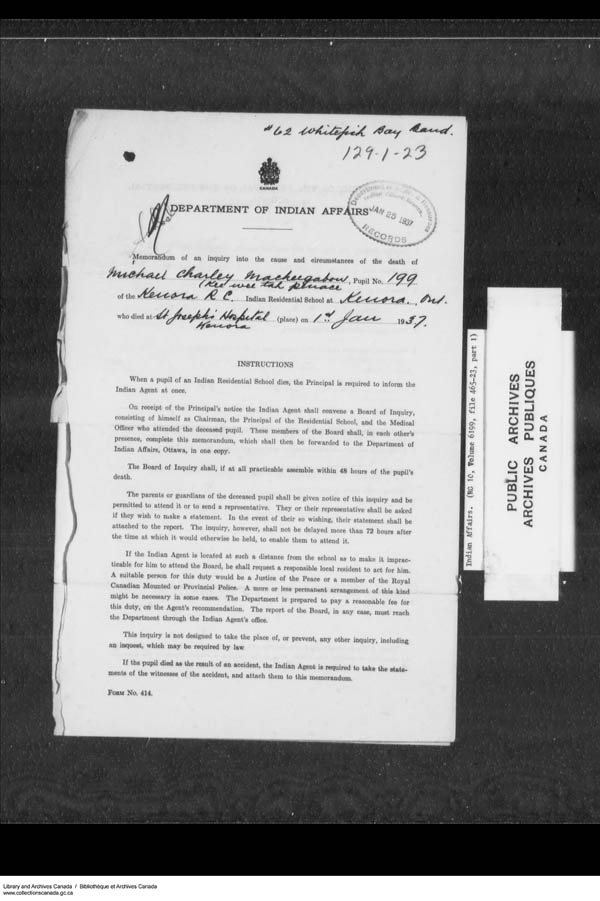 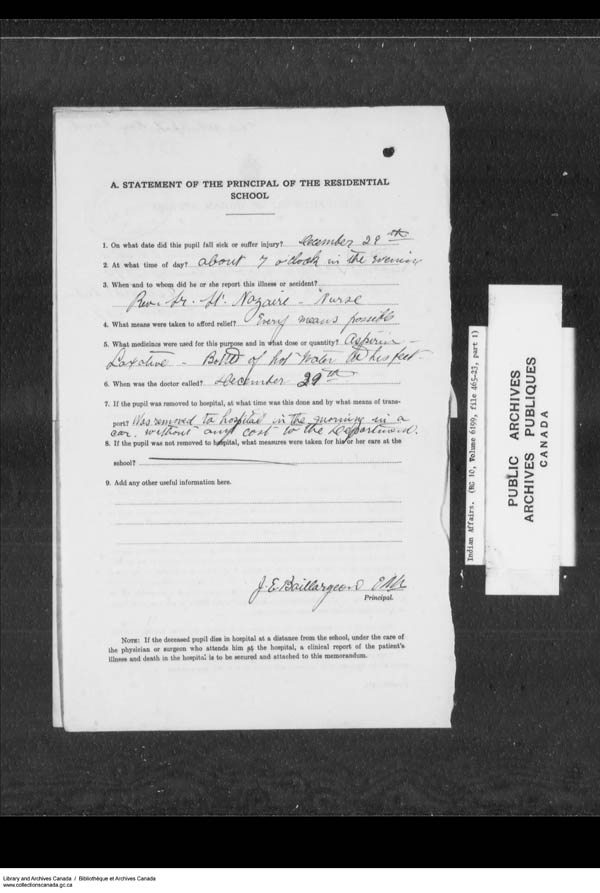 In the case of John Jack, the two-page report stated that at 7 pm, on January 2, Jack reported not feeling well to the nurse. He was given a teaspoon of Epsom salt and an aspirin and then put to bed in his dorm.

The doctor was called at 2 p.m. the next day and shortly after that call, Jack was taken, by sleigh, to St. Joseph’s Hospital in Kenora, where he died after falling into a coma, shortly thereafter. In this case, they were able to contact the parents to inform them of their child’s death. They lived 100-miles away. The cause of young Jack’s death was listed as Influenza.

Michael Charley Macheegabow, Student number 199, died the previous year on January 1, 1937, of what is listed as Meningitis, after being sent to Kenora Hospital with a temperature of 104. It is assumed the transport to the hospital was also made by sleigh. He arrived in a comatose condition and never recovered.

Then there was the sudden death of another boy after being taken to the Kenora Hospital with Sleeping-Sickness. There was no name on this form.

At the same school on January 10, 1938, an orphan student, Nancy Keewatin, died at the St. Josephs Hospital in Kenora of Tuberculosis. A memo in her file instructs the school to send T.B infected students to the nearest sanitarium as soon as possible.

Student number 0273, Rosaline Bird of the Whitefish Bay Band, died at the Kenora hospital following being transported there on June 26th, 1941. Bird complained to the school nurse of not feeling well at 10 a.m. June 1st. She was sent to bed with a teaspoon of oil and the doctor called. She was transferred to the hospital by car the same day. She was treated and sent back to the school but was sent back to the hospital days later. She was finally diagnosed as having Meningitis, a highly infectious disease. The child was buried at the Kenora, RC Residential School burial ground.

Finding these reports isn’t easy. They are filed along with day-to-day purchase orders and quotes for work being done around each school and other non-important pages. But if interested in starting your own inquiry, stay patient and sift through these papers, primarily in government file RG 10.

Opinion January 25, 2023 • Comments off
For a lot of us who grew up on Six Nations, no matter what challenges or struggles rez life may bring, Six Nations is always…

Bell Let’s Talk, to your plants

Op-eds January 25, 2023 • Comments off
It is Bell Let’s Talk Day today meaning it is time to remind ourselves again of the importance of talking about mental health throughout the…

Residential school system recognized as genocide in Canada’s House of Commons: A harbinger of change

Opinion January 18, 2023 • Comments off
By Erika Dyck Patients in Alberta will now be able to legally consider adding psychedelic-assisted therapy to the list of treatment options available for mental…

Opinion November 16, 2022 • Comments off
Further to the case conference endorsement date September 21, 2022, and in Particular paragraph 2 (b), the Men’s Fire of the Six Nations Grand River…

Editorial November 2, 2022 • Comments off
There is a beautiful tradition among the people of the Confederacy and those who follow the Great Law of Peace that has been the inspiration…

Columns November 2, 2022 • Comments off
I’m looking after a friend’s plants for a few weeks and when checking in on them yesterday morning I found one looking pretty drowned. How…