CBC launched “Telling Our Twisted Histories” in May. An 11-episode podcast series that reclaims Indigenous history by exploring 11 words whose meanings have been twisted by centuries of colonization. 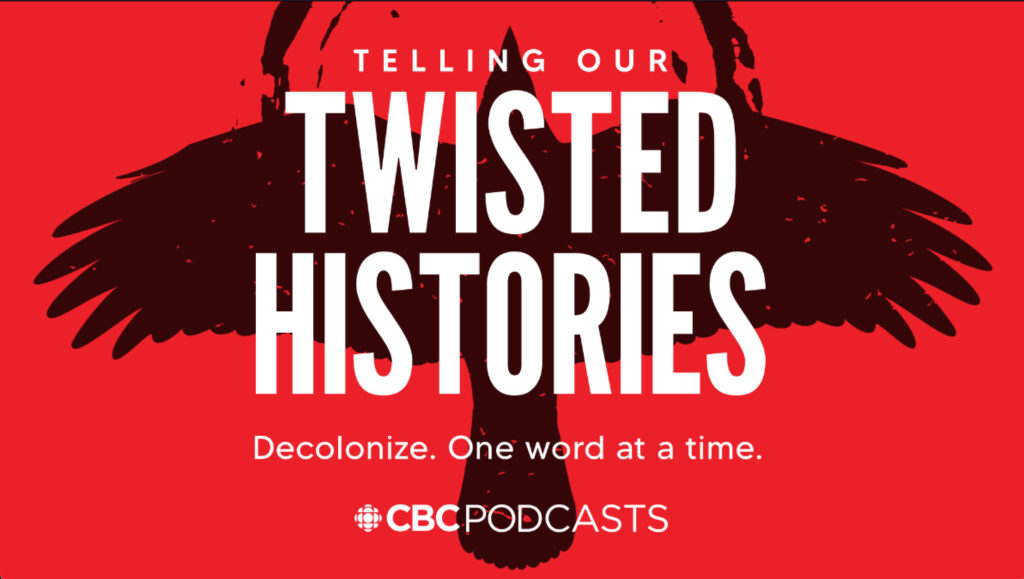 “Savage. Reserve. Indian Time. Words connect us, but also have the power to wound, erase and replace us,” says Horn. ”As Indigenous people, we are used to our stories getting a little twisted. This podcast is all about exploring some of these words, with humour and truth, so that we all better understand how they impact us to this day.”

The first two episodes “Discovery” and “Reserve” are available now on CBC Listen and everywhere else podcasts are available for free. New episodes will be released weekly on Mondays until August 2.

Horn is a Canadian actor from Kahnawake, the Kanien’kehá:ka (Mohawk) reserve outside of Montreal. She stars as Mari in the National Geographic series Barkskins, based on the 2016 novel by Annie Proulx, and currently appears in the critically acclaimed comedy series, Letterkenny.

Michelin is an Inuk from North West River, Labrador where he grew up in a large family of storytellers. He specializes in print and online reporting, photography, and video and audio storytelling.

TRT: What was your role as director?

Michelin: I listened to the 20 plus hours of English interviews plus I did a few more interviews myself with some Inuit participants. I listened to them and we all worked together to choose which exact clips we were going to use. I selected all the clips and I wrote all the dialogue for the host.

TRT: How would you describe the host’s style?

Michelin: I was so excited to have Tiio on as a host. She was my number one pick to be the host for this. She brings a lot of her humour, warmth, and personality to the role. We left room in the script to have her able to bring herself into it as well. She’s really funny and such a natural that she just really helped bring everything to life.

TRT: Describe the tone of the podcast?

Michelin: We talk about a lot of serious stuff but at the same time we try to keep it light and conversational so people can digest it. And also it was really important to us at every step to show that if you’re in a room with Indigenous people you’re going to hear laughter. We wanted to make sure that our humour and a bit of teasing was in there too. If you’re around Indigenous people and they’re teasing you, you know they like you.

TRT: What do you hope to accomplish with the podcast?

Michelin: Two things. The first is I want Indigenous people to hear this, and say ‘Yeah! I connect with this. I see myself reflected back in this.” Also at the same time, there are so many different Indigenous groups out there, it’s a good chance for everyone to learn about their neighbours. To hear what other people do similarly or differently, or say,  ‘Oh man, I can’t believe other people do things that way.’

TRT: Who is the target audience of the podcast?

Michelin: It’s for anyone that wants to learn more and decolonize their vocabulary and do better.

TRT: What are some emotions you hope listeners will feel while listening to the podcast?

Michelin: Curiosity is the main one. I hope that people hear the podcast and it gets their curiosity peaked so they can learn more about these different peoples they hear from. Or just more about their history. A lot of the words we’re decolonizing and explaining, they’re not accurate, like Europeans didn’t discover here, and we know that, but it’s still getting thrown around. We want people just to be curious and become critical and think about some of these words that they’ve been taught and really just see how that affects their lives and the lives of people around them.

I hope it sparks a curiosity. And even for Indigenous folks as well, I hope it sparks a curiosity to go out and learn more about other Indigenous people out there. I’m from Labrador and I loved hearing all the Cree perspectives. Because we come from very similar lands and it’s just nice to hear somebody who comes from a place that’s like yours but different. I think anybody would find that fascinating.

TRT: The tagline on the artwork says: Decolonize, one word at a time. What does that saying mean to you?

Michelin: Each episode we examine words and we ask people ‘how does it make them feel?’ We talk about the history of the word and then we learn about the word. I think the best way to recolonize anything is to start being curious and critical and you need to think about it in a way that’s honest and really this whole podcast is the practice of doing that.

TRT: How did you select the words being discussed?

Michelin: Eleven words were chosen because there are 11 different Indigenous groups in Quebec. It started off in Quebec. So there are 10 First Nations and then Inuit in Quebec. That’s how we chose 11. Basically, we picked words that we knew would elicit a reaction from Indigenous people.

TRT: How can podcasts and other advancements in technology help Indigenous people heal or unpack from colonization?

Michelin: It’s on-demand. It’s there when you’re ready for it. If you’re in the right space to listen to these conversations, you can. When it’s on broadcast [TV] you have to wait for it to come on again or record it, but in a podcast, you can listen to it when it’s accessible for you and when you have the time. And I think that kind of goes with one of the episodes we had on “Indian Time” and just the perceptions of time. You don’t need to worry about being late and missing the beginning of it, you listen to it when you’re ready. There’s no wrong time to listen.

One more thing — this podcast feels really fresh and new. We’ve been inundated with stereotypes and these weird two-dimensional portrayals of Indigenous people for too long and these have all been done to death. You can tell Pocahontas in a fresh new way. And I think that because our voices haven’t really been present in this big national Canadian conversation as much as they should be, that these appear to be new and exciting to anybody who’s not familiar with them.

Also for us as Indigenous people, it’s really exciting to hear these stories and conversations we’ve been having among ourselves forever getting out there and being shared with the country. I think it shows that there is an appetite out there for Indigenous people telling Indigenous stories.

Telling Our Twisted Histories is a CBC co-production in association with Terre Innue, based on an original concept by Karine Lanoie-Brien and produced by Francine Allaire and Élodie Pollet. An award-winning French-version of this podcast, Laissez-nous raconter : L’histoire crochie, was released by Radio-Canada in June 2020.