Coming home: Navajo to get treaty that ended imprisonment 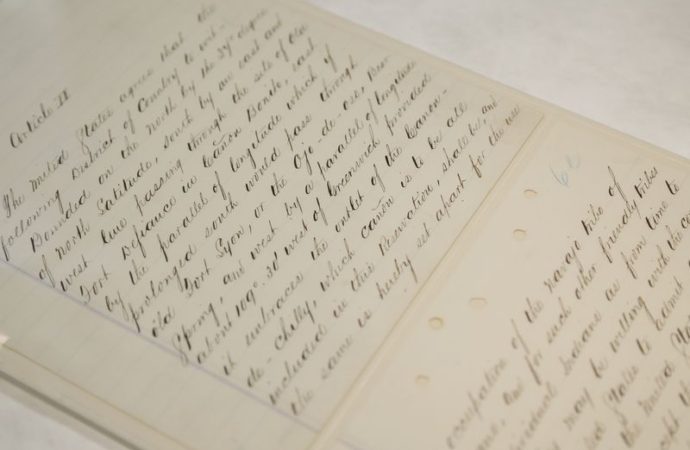 FLAGSTAFF, AZ —  A 150-year-old document that allowed Navajos to return to their homeland in the Four Corners region where Arizona, New Mexico, Utah and Colorado meet is destined for a permanent home at the tribe’s museum. Navajos had been imprisoned at a desolate tract of land in eastern New Mexico before signing a treaty

FLAGSTAFF, AZ —  A 150-year-old document that allowed Navajos to return to their homeland in the Four Corners region where Arizona, New Mexico, Utah and Colorado meet is destined for a permanent home at the tribe’s museum.

Navajos had been imprisoned at a desolate tract of land in eastern New Mexico before signing a treaty with the federal government in 1868. The United States signed hundreds of treaties with Native American tribes as acts of peace and friendship or to end wars, but the Navajos were unique in securing a return to their homeland bounded by four mountains they consider sacred. 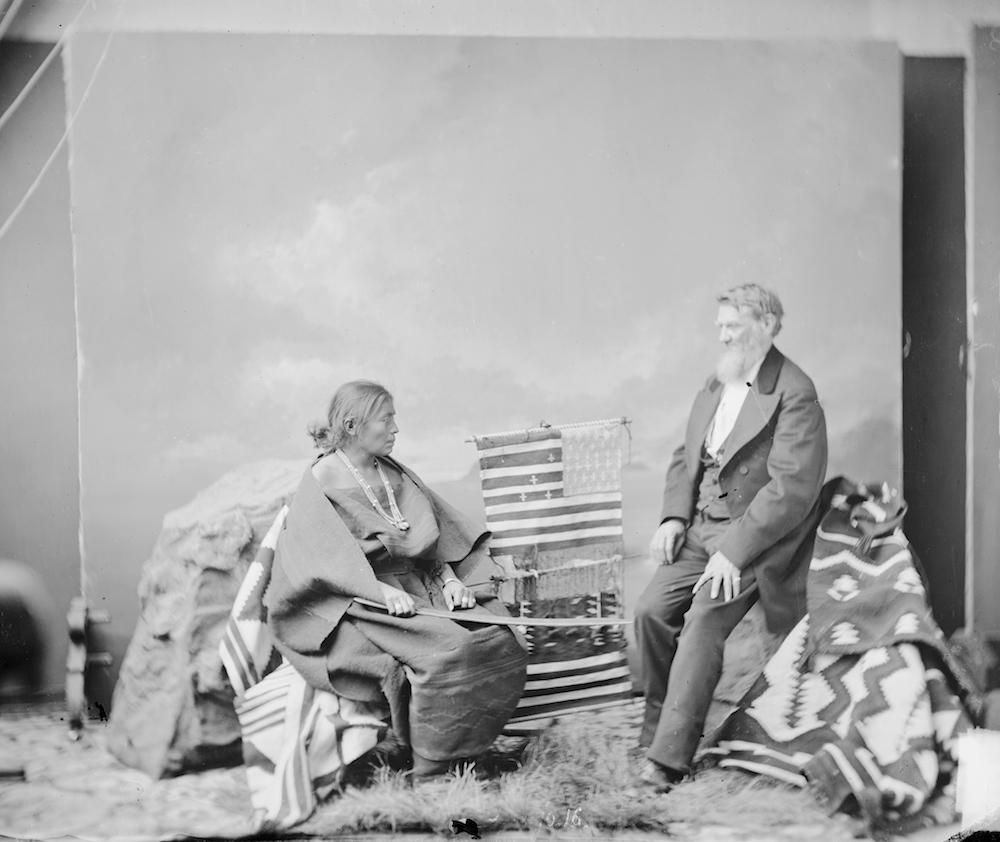 A Navajo legislative committee is expected to vote Tuesday to accept an original copy of the treaty that was believed to have been lost and is one of only three original copies.

It had moved among cardboard boxes, chests and filing cabinets in the Manchester, Massachusetts, home of Indian Peace Commissioner Samuel F. Tappan, who helped negotiate the treaty. His great-grandniece, Clare “Kitty” Weaver, said she had seen it among Tappan’s papers but only recently learned of its importance.

Another copy of the treaty is in the National Archives, and last one was given to Barboncito, the last Navajo chief to surrender to military forces in 1866, but its whereabouts are unknown.

Barboncito and thousands of Navajos had been forcibly marched to the Bosque Redondo reservation in Fort Sumner, New Mexico, after the military destroyed their crops and livestock.

Tribal officials asked Weaver last year during a gathering for the 150th anniversary of the signing of the treaty if she would donate the Tappan copy to the Navajo Nation.

“There were two things I had to deal with: my head and my heart,” said Weaver, who is writing a biography on Tappan. “And my heart knew right away that it should go to the Navajos. And my head took a little more time because I wanted to be sure that the protocols were in place for housing the treaty.”

Under an agreement signed this month, the treaty must be kept in a climate-controlled environment under lock and alarm or live security. An archivist will check on it periodically, and it won’t be displayed for more than six months total over a 10-year period. It also must be shared with a memorial site at Bosque Redondo and cannot be sold.

Tribal law says the Navajo president cannot accept gifts or donations worth more than $1,000 without the legislative committee’s approval. The Tappan treaty _ written on 17 pages of ledger paper, measuring 8 inches by 12 inches and tied with a faded red ribbon _ is valued at $10,000.

Suzan Shown Harjo, guest curator of an exhibit on treaties at the National Museum of the American Indian, said treaties have taken different forms, from being recorded on parchment or ledger paper to being depicted on beaded belts.

Seeing original treaties connects people with their ancestors, whose DNA is on the historical records, she said.

“There’s just sort of a wave of recognition that these are the people who signed this treaty for me, and these are the people who went through what they went through for me,” said Harjo, who is Cheyenne and Hodulgee Muscogee. “They did it for my grandchildren, they did it for all the coming generations, whether it was a terrific treaty or a half-good treaty or some treaty, they did the best they could.”

Tappan and Gen. William T. Sherman negotiated a treaty with the Navajos as part of the Indian Peace Commission. Neither of them signed the copy being donated. Only one Navajo leader could sign his own name.

The treaty marked the end of years of Navajo imprisonment. Those who couldn’t keep up with the journey to Bosque Redondo _ known as the Long Walk _ were killed. Disease, the harsh winters and unfamiliarity with how to prepare foods also led to deaths. Navajos call the land “Hweeldi,” meaning a place of suffering and fear.

Sherman and Tappan planned to move the Navajos to land in present-day Kansas and Oklahoma, but those at Bosque Redondo were intent on going home.

“The bringing of us here has caused a great decrease in our numbers,” Barboncito said at the time, according to historical documents. “Many of us have died, also a great number of our animals. Our grandfathers had no idea of living in any other country except our own, and I do not think it is right for us to do so.”

The Navajo reservation now spans 27,000 square miles (69,930 square kilometres) in Arizona, New Mexico and Utah, and is the largest in the United States.

Navajo President Jonathan Nez said having the Tappan treaty in the tribe’s museum will “magnify the resilience of our Navajo people.”

“We were never ready to be taken off this planet,” he said. “Our people stayed strong.”

The museum will display the treaty for a week starting June 1, then it will travel for pop-up exhibits in Navajo schools and communities, museum director Manuelito Wheeler said.

“It’s an honour to care for something as important as this,” he said.