“He’s the one doing ten more push ups than you,” Trainer Jackie Armour on Karl “The Razor” Hess.

BRAMPTON — In a split decision during his match up with Mikhail Miller, Welterweight Boxer Karl “The Razor” Hess was awarded victory after their six-round fight at the CAA Centre.

The centre filled with support for Hess, who entered the arena with a remix of For Whom the Bell Tolls by Metallica played in the background over the rumble of “Razor, Razor, Razor,” from the crowd.

After the two boxers proved the bout was a close one, even with Millers height advantage, the crowd erupted when the scores were announced for Hess. He was given a scoring of 58-56 from two out of three judges — earning his fourth professional victory.

After losing his pro-debut, Hess has since throttled in his return to the ring with back-to-back TKO’s ahead of Saturday’s fight. 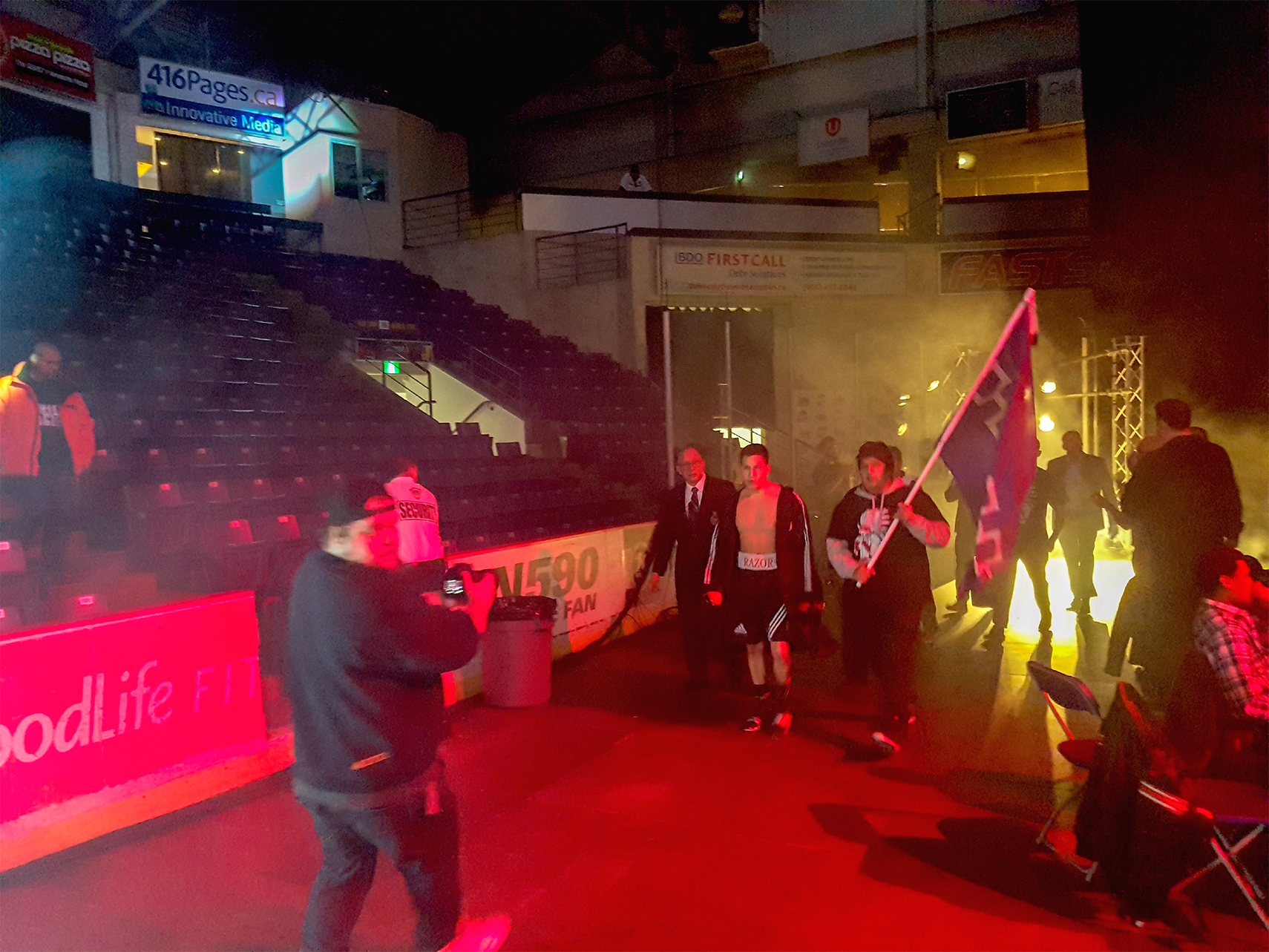 Since his pro debut, the “Razor” has worked hard to be in the winners circle. To help keep him there, Trainer Jackie Armour has been a motivating force.

“It was his first six-round fight,” said Armour. “He was able to go the distance and that’s kind of what I wanted to see. Like I wanted to give him some work because the last two guys he stopped in the first.”

He said that Hess is a natural but he provided him with a range of strategic options to use against Miller including factoring in his height, as Armour described Miller as a “boxer” that leads with his hind foot and Hess as a “banger” that likes to hit hard and stay on the offensive.

In regards to the result of going the six rounds, Armour was happy with Hess’s win but the split decision did move him to want to ensure a better victory next time. This brought him to explain that there were some mistakes made during the fight, but that it is a part of the process of being a boxer — which in itself is no easy feat. According to ESPN’s comprehensive ranking of sixty different sports, the toughest sport of all is boxing as it takes skill, quick reaction time, endurance and stamina. But improving is key.

“There are a lot of things that we have to go over and there’s things that we need to clean up and work on,” he said. “But that’s in every sport, you’re always striving to be better.”

And Hess can step up to the plate as Armour said that Hess is the type of athlete to “do a run and lap you” as he noted their track runs on Tuesdays; which would leave him marvelling at the endurance Hess hones.

“He does a lot of work,” he said. “I’m not sure of the ancestry but he is related to Tom Longboat and I’ll walk the track while he runs it. The pace that he runs at is phenomenal; I just can’t get over how fast he runs and he never breaks stride.”

This means that a combination of all of Hess’s gifts have helped him to shape a growing pro-career.

“I’ve been in sports for a lot of years and I’ve been in boxing for 19 — he’s one of the most gifted fighters I’ve laid my eyes on,” said Armour.

He also commended the fans and supporters that braved the storm to support and cheer Hess on.