By TRT Staff, with notes from NHL.com

Hunter is a 2 Spirit Ojibway from Red Lake, Ontario specializing in Indigenous themed designs and original painted artwork. His designs have been applied to everything from corporate branding, to mugs, apparel and steel. He is also the recipient of a 2021 Indigenous Entrepreneurship Award from Pow Wow Pitch, a non-profit organization that supports and celebrates Indigenous entrepreneurs.

Hunter was announced as a winner of the 2021 Entrepreneurial Spirit Award at the inaugural awards which celebrate excellence and outstanding achievement and impact in Indigenous entrepreneurship.

Through his business, Patrick has created commissioned pieces and large murals while teaching virtual painting classes to support Indigenous artists in expressing their culture through art. He has worked in graphic collaborations with RBC, BMO, EY, West Elm, Staples, and the Chicago Blackhawks and was the first Artist in Residence for Prince’s Trust Canada charity that aids in the reclamation of Indigenous languages.

The artist that designed Fleury’s original mask for the season with the Chicago Blackhawks said that three of his designs were rejected by the team over “racial tensions.” 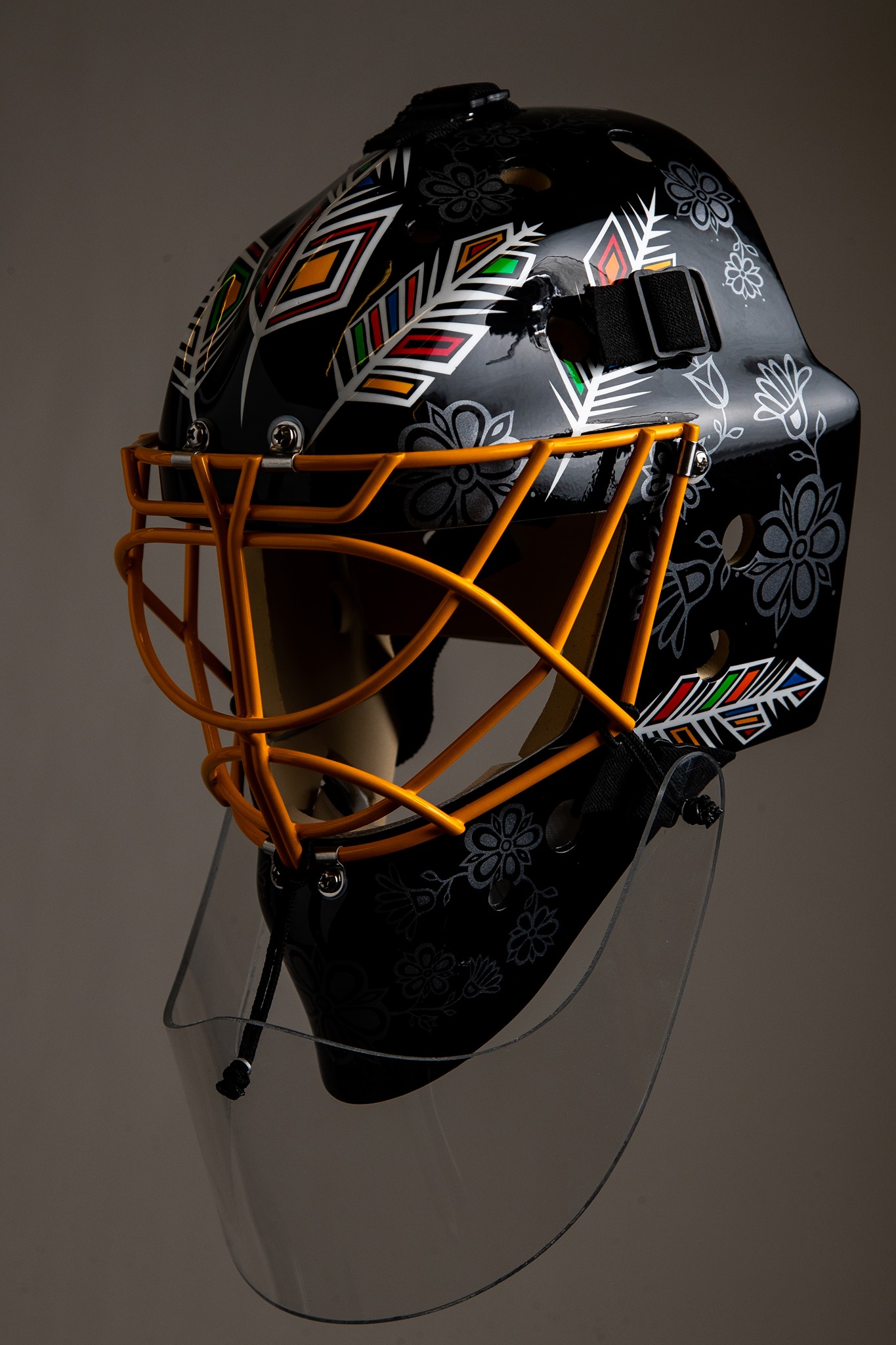 “After three concepts refused by the team due to racial tensions, here is Marc-Andre’s new mask,” wrote Bergeron to his Facebook account. “Many elements related to natives cannot be reproduced on the masks of the Blackhawks which greatly limits my creativity.”

But a limit of creativity was not met by Hunter.

In a post to Facebook, Hunter named his piece “Courage,” and explained that the design is interwoven with Anishnaabe teachings.

“It shows the feathers and florals I originally designed for their first ever Land Acknowledgement that they play in United Centre before each home game. The feathers represent the 7 grand father teachings, something that all their players exemplify. They also represent the nations that surround Chicago, the team, Black hawk himself and the 3 Fires Confederacy. Connecting all of these feathers together are floral designs that Indigenous Communities around the Great Lakes would have beaded or sewn similar motifs onto clothing and traded amongst each other for hundreds of years and even to this day,” he wrote.

Fleury, whose wife is of Abenaki and Mi’Kmaq descent, debuted the new mask designed by Hunter during morning skate last Sunday at the United Centre.

Sports November 30, 2022 • 0 Comment
TORONTO — Welcome Toronto is the product of the Raptors and OVO coming together to focus on spotlighting emerging Indigenous, Black, non-binary, female and other…