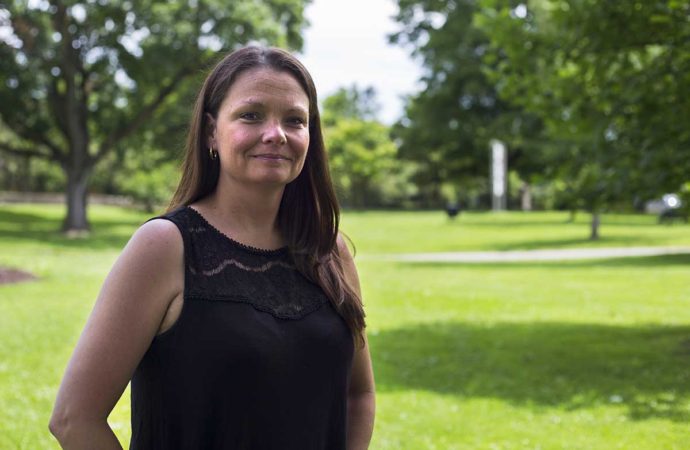 BRANTFORD — Sabrina Sawyer, Indigenous Education Lead for the Grand Erie District School Board, is seeking the NDP’s nomination for the riding of Brantford-Brant in the Federal Election this fall. “There’s a divisive trend in politics right now that is undoing the progressive gains we’ve made over the past few decades,” said Sawyer of her

BRANTFORD — Sabrina Sawyer, Indigenous Education Lead for the Grand Erie District School Board, is seeking the NDP’s nomination for the riding of Brantford-Brant in the Federal Election this fall.

“There’s a divisive trend in politics right now that is undoing the progressive gains we’ve made over the past few decades,” said Sawyer of her decision to run. “I need to be able to say to my family, my friends and to this community that I have done everything possible to not only stand up against these trends, but to do everything I can to reverse them.”

“I’m running because I believe Jagmeet Singh and the federal NDP are best suited to address the many issues we all face here in Brantford-Brant,” said Sawyer. “Too many of our families are having to choose between their essential medications and having enough money to cover the rising costs of food and housing. Too many people in our community are foregoing vision or dental care because they can’t find work that will supply them with these essential benefits. In our classrooms every day, I see the disparity between students – it’s growing and it shows no signs of stopping. This is unacceptable. We need a change and I want to lead that change in our community.”

“This isn’t about politics for me,” Sawyer added. “This is about advocating for everyone in Brantford-Brant, including Six Nations and Mississaugas of the Credit. Our community deserves better and I believe the New Democrats can lead us there.”

Sawyer, who is Anishinaabe, from the Mnjikaning of Rama, Marten Clan, said Reconciliation will be one of her priorities:

“Reconciliation is first and foremost in my every day. As an Anishinaabe woman, mother, educator and a person who resides in a community that is so personally impacted by the haunting past of the Mohawk Indian Residential School as well as the on-going intergenerational trauma, it has to be.”

“Every day, I work at building relationships, making connections and creating intercultural understanding in all communities throughout Six Nations of the Grand River, Mississaugas of the Credit, the City of Brantford and the County of Brant. Reconciliation is not about photo opportunities or special events. It’s about the people, and it’s about coming together – not only as a community, but also as a country. My work is focused on supporting our families, our communities, our educators and our children as we build a successful future together.”

“As the Member of Parliament for Brantford-Brant, I will continue this important work on Reconciliation, but will be able to do it on a grander scale. I firmly believe the NDP have demonstrated their commitment to advocating for true work in Reconciliation and that is why I want to run as a New Democrat.”

Sawyer grew up in Peterborough where she completed both her Honours Bachelor of Science and Bachelor of Education degrees at Trent University. In 2005, her family moved to Brantford to open a small business and to raise her two children.

In 2006, Sawyer began teaching at Grand Erie where she served as a Junior division teacher at Lansdowne-Costain Public School. In 2015, she was promoted to the Board’s Indigenous Education Lead role where she creates opportunities for important discussions, learning opportunities and events that focus on the rich history and culture of Indigenous peoples as well as Reconciliation, Residential Schools and Treaties. In addition to her current role at Grand Erie, Sawyer is a Union Leader for the Elementary Teachers’ Federation and is actively engaged in the Brantford District Labour Council.