“So proud to see Ninjiichaag performing at the Toronto Raptors game for Indigenous Heritage Night. Miigwech to the Raptors for an unforgettable experience!” Wrote the MCFN Facebook page.

Along with the performance by Ninjiichaag, the game highlighted Anishnaabe artist Joshua Mangeshig Pawis-Steckley, who designed t-shirts sold at the event with 15% of gross sales donated to Toronto Council Fire Native Cultural Centre. Said t-shirts were marked as sold out the same night.

“Today and every day, we celebrate Indigenous heritage,” reads a post from the Real Sports Apparel Twitter page.

As for the game results, the Raptors provided a good show with a win 116-109 score over the visiting Houston Rockets. The Raptors took another win on November 14 against the Detroit Pistons, a first win over the Pistons in three seasons. 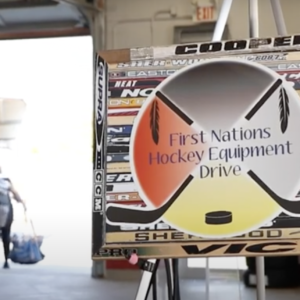 Indigenous Hockey Equipment Drive on track with plans for 2022

Sports November 2, 2022 • 0 Comment
Last Saturday, as many Indigenous boys and girls received help to get on the ice to enjoy the game of hockey in Sudbury. For the…