It remains, despite nearly two centuries beneath the Arctic seas, amazingly shipshape.

First pictures from inside the HMS Terror, part of the doomed Franklin Expedition, show tidy rows of crockery, neatly stowed storage lockers — even a propeller sitting solidly in place as if ready for a head of steam. 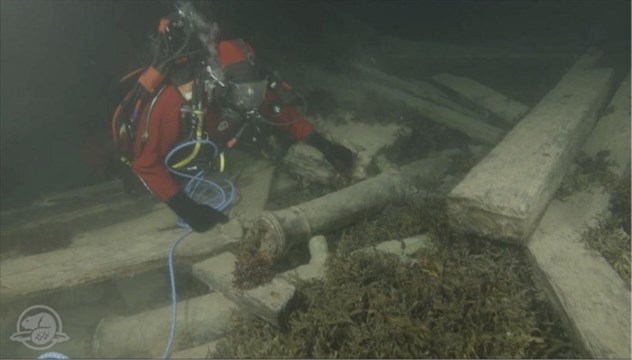 “Overturned armchairs, thermometers on the wall, stacked plates, chamberpots, washbasins — often in their correct position,” said Ryan Harris, one of a team of Parks Canada underwater archaeologists probing the secrets of the British warship lost around 1848 while searching for the Northwest Passage.

“We were able to see an incredible array of artifacts.”

The Terror and the Erebus, now lying in shallower water just to the south of its sister ship’s watery berth off Nunavut’s King William Island, set out from England in 1845. Commander Sir John Franklin and his 129 men never returned.

More than 30 expeditions tried to find them. A few artifacts, graves and horrible tales of cannibalism is all they uncovered.

But with a blend of Inuit oral history and systematic, high-tech surveys, the Erebus was found in 2014 and the Terror two years later, to headlines around the world. Since then, Parks Canada has been working to understand what is down there and what light it could shed on a story that has become part of Canadian lore.

The 2017 season yielded a complete underwater survey of the Erebus, Franklin’s flagship. Bad weather shortened last year’s season, but conditions this year couldn’t have been better for a first look into the Terror.

“It was sunny and calm,” said Harris, speaking by satellite phone from the RV David Thompson, the Parks Canada research vessel perched over the Terror. “You start to see the wreck shortly after you start your descent.”

After numerous dives scouting the exterior, Harris piloted a melon-sized remote camera through an open hatch and into the ship. The images were stunning.

“You have the lights of the ROV penetrating the darkness,” he said. “Looking forward in the corridor, you see the list of the ship to starboard.

“And then off to the left, you see a succession of doors into various officers’ cabins. Every single sliding door agape. Just imagine piloting the vehicle into one cabin after the next and see the private quarters of each officer. You see the bed places, you see the shelves, shipboard articles on the shelves, scientific instruments in their cases and many, many drawers.”

It was, he said, awe-inspiring.

“You can imagine the bustle of activity that once filled these corridors and cabins and messrooms with clamour,” Harris said. “You carefully manoeuvre the ROV into the cabins, you feel like you’re in a way violating their privacy. It’s exhilarating, but it’s quite a solemn space.”

The ship remains so intact the camera was able to visit 90 per cent of it. Some skylights even retain their glass.

The only door they found closed was, tantalizingly enough, the one opening on the cabin of captain Francis Crozier.

Even more tantalizing are all those cabinets and drawers, probably full of journals and maps, Harris said. Those papers, preserved by cold water and a protective layer of sediment, are likely to be legible.

“Each drawer potentially has materials that could shed light on the fate of the expedition,” he said.

The Terror’s tidy condition only poses another mystery.

“It looks like the ship, in many ways, was fully operational and then suddenly deserted. All the cabin doors were opened, almost as if there was a rush to see if anyone was on board as it sank. We don’t know.”

No Terror artifacts have been recovered. The team has first to map the entire site and analyze hundreds of hours of video.

Excavation is just starting on the wreck of the Erebus. Harris said he hoped the team could stay at work until mid-September.

A total of 65 artifacts previously recovered from the Erebus were retained by the United Kingdom, with many now on tour. Canada and the U.K. will negotiate where those objects will go after the tour is over. Parks Canada is storing other Erebus artifacts.

The U.K. has given the ships to Canada.

Future plans for both ships will be decided between Parks Canada, the government of Nunavut and Inuit. Harris said local guardians and assistants are playing an important role in the work.

“We work very closely with the guardians,” he said.

Meanwhile, the work continues. Harris can hardly contain his enthusiasm.

“It’s just an avalanche of incredible sights, so many things that put you in the place and the time,” he said. “We have a lot of work to do.”

The magical habitat of Chiefswood Park

Local News May 25, 2022 • 0 Comment
As the ancient waters of the Grand River whispered past Chiefswood Park on a warm and sunny spring afternoon last Thursday, the grasses, plants, and…

Local News May 25, 2022 • 0 Comment
The Six Nations Language Commission is asking the community for input on what it would like to see more of from the organization. A booth…

Local News May 25, 2022 • 0 Comment
Fibre optic internet is coming closer to being a reality on Six Nations after First Nations Cable announced a partnership with major players in the…

Bread and Cheese brings back old friends and traditions

International May 25, 2022 • 0 Comment
For the first time since the pandemic was declared in 2020, Six Nations was back together again in one of the largest and most beloved…

‘They have a right to be angry’: Trudeau says residential school legacy ongoing

National May 25, 2022 • 0 Comment
VANCOUVER — It’s been a difficult year for many since the discovery of unmarked graves at residential schools and those expressing anger are justified in…

‘They have a right to be angry’: Trudeau says residential school legacy ongoing

National May 25, 2022 • 0 Comment
VANCOUVER — It’s been a difficult year for many since the discovery of unmarked graves at residential schools and those expressing anger are justified in…

National May 25, 2022 • 0 Comment
EDMONTON — A lawyer representing an Alberta man accused of killing two Metis hunters says his client had no choice but to shoot the men…

National May 25, 2022 • 0 Comment
WINNIPEG — The name Rebecca Contois reverberated down a back lane Thursday night, days after her partial remains were found there. Dozens of people raised…

National May 25, 2022 • 0 Comment
BROKEN ARROW, Okla. (AP) — A Native American student was forced to remove an eagle feather prior to her high school graduation ceremony in northeastern…