In some instances, perpetrators will invent a false rumour about their victim in an attempt to manipulate others to join in on attacking their target.

It’s different if someone really was caught doing something unethical — like stealing money for example. If the community does not trust them with money anymore that is NOT bullying.

But if a lie is formed to create a false narrative about a person — a fake story that isn’t based in fact — at that point any negative treatment that person receives due to the lie becomes bullying.

This week a terrible act of what we call cultural bullying was launched on Six Nations of the Grand River Development Corporation’s employees Matt Jamieson and Tabitha Curley when about 25 people blocked A6N workers from heading back to work.

Colin Martin has emerged in recent weeks as the new speaker for the HCCC. Martin took it upon himself to ask both Jamieson and Curley about their lineage.

When he asked Tabitha who she was and she answered by giving her name and clan family Colin asked her a question. “Are you saying you’re Haudenosaunee?”

Tabitha replied by saying, “Yes. And I’m saying I’m also a member of the Confederacy. Everybody here is.”

Colin’s reply was, “The confederacy council has allowed you to have that identity.”

This is a clear example of cultural bullying.

This is fact, and not something that needs to be qualified or verified by Colin Martin, the HCCC or anyone else.

Maybe it made Colin feel really important to be able to speak to Tabitha in this way. Was it proof that he knew more than her? Or maybe a demonstration to the people around him that he was better connected to the HCCC and knows the “real rules” of what it means to be a Haudenosaunee?

Another person in the crowd shouted out to Matt Jamieson, “What kind of a Haudenosaunee are you?” A question to which he replied, “I grew up here man.”

It was a good answer.

If the HCCC really feels like this is justifiable behaviour by all means, carry on.

But there are thousands of Haudenosaunee people whose identity and membership in this community does not depend on whether or not they have the HCCC’s permission to be called a Haudenosaunee.

There are thousands of people on Six Nations who belong to the 49 clan families, lineages that were disrupted by colonization. People who, through no fault of their own, don’t know who their clan or chief or clan mother may be. People who don’t deserve rejection or critical analysis by the HCCC or any of it’s speakers to qualify what box they fit in.

There is no Haudenosaunee measuring stick.

Cultural bullying only teaches us that we can’t trust each other.

We shouldn’t judge one another. If you are going to pass judgement — judge justly by examining both sides to a story and drawing an unbiased conclusion after the evidence is heard. Too many people have formed opinions about each other without having access to the facts and trusting rumours way too much.

We shouldn’t punish each other. If you are going to punish someone because you think they deserve it, whether it be the silent treatment or some other form of lateral violence you should recognize that punishment isn’t our way and it was taught to us through colonization, Christianization and residential school.

No matter how bad it gets in Six Nations we should remember what our ancestors went through in the name of peace. Think of the very first Grand Council when all 49 families were represented there. The Onondaga wizard Tadadaho had murdered Hiawatha’s daughters, and some say that Tadadaho either raped them or ate them, depending on who you ask. Either way it was super horrific and couldn’t be much worse.

Hiawatha and Tadadaho put their personal differences aside to find a pathway to peace — respecting one another’s differences and autonomy. One can only hope our current leadership can do the same thing.

Editorial: Bravery to tell someone…

Editorial December 1, 2021 • 0 Comment
Imagine being assaulted by your partner, having the bravery to tell someone what has happened, and then to have members of your own community gaslight… 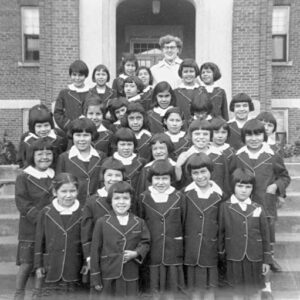